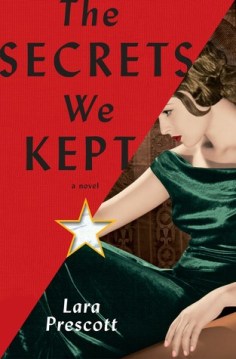 Official Synopsis from Goodreads: A thrilling tale of secretaries turned spies, of love and duty, and of sacrifice—inspired by the true story of the CIA plot to infiltrate the hearts and minds of Soviet Russia, not with propaganda, but with the greatest love story of the twentieth century: Doctor Zhivago.

At the height of the Cold War, two secretaries are pulled out of the typing pool at the CIA and given the assignment of a lifetime. Their mission: to smuggle Doctor Zhivago out of the USSR, where no one dare publish it, and help Pasternak’s magnum opus make its way into print around the world. Glamorous and sophisticated Sally Forrester is a seasoned spy who has honed her gift for deceit all over the world–using her magnetism and charm to pry secrets out of powerful men. Irina is a complete novice, and under Sally’s tutelage quickly learns how to blend in, make drops, and invisibly ferry classified documents.

The Secrets We Kept combines a legendary literary love story—the decades-long affair between Pasternak and his mistress and muse, Olga Ivinskaya, who was sent to the Gulag and inspired Zhivago’s heroine, Lara—with a narrative about two women empowered to lead lives of extraordinary intrigue and risk. From Pasternak’s country estate outside Moscow to the brutalities of the Gulag, from Washington, D.C. to Paris and Milan, The Secrets We Kept captures a watershed moment in the history of literature—told with soaring emotional intensity and captivating historical detail. And at the center of this unforgettable debut is the powerful belief that a piece of art can change the world.

Genre: Historical Fiction
Setting: 1950s Washington DC and Russia
My Copy Came From: I purchased the Kindle version from Amazon

Review: Disappointing, with a synopsis that sounds far more interesting than it is. The Secrets We Kept by Lara Prescott was a title that I was very excited to read! It was a Hello Sunshine Book Club Choice (Reese Witherspoon’s Book Club) for September, and it has a promising synopsis involving spies and the Cold War and Doctor Zhivago. Sadly, the book never really went anywhere, and the Doctor Zhivago plotline with Boris Pasternak and his longtime mistress, Olga, and the CIA plotline with Irina and Sally didn’t merge well for me, and the two stories felt forced together for the sake of the novel.

Secretary: a person entrusted with a secret. From the Latin secretus, secretum. We all typed, but some of us did more. We spoke no word of the work we did after we covered our typewriters each day. Unlike some of the men, we could keep our secrets.

Told in multiple point of view (POV) chapters, there are too many narrators in this novel. Some POV chapters are first person, some are third person, and this was confusing to me. Why do this? Another issue I had with the POV chapters was that the chapter titles were not the character’s names. For example, we don’t get a chapter from Boris Pasternak’s perspective titled “Boris”, we get one titled “The Cloud Dweller”. And then later on another Boris chapter is called “The Prizewinner”. These titles keep shifting throughout the novel, for different characters, and I got so tired with these complicated titles that I ended up ignoring the chapter headings, and therefore it would always take me a bit before I figured out whom I was reading about.

The funny thing was, I never thought of myself as a spy. Surely the craft took more than smiling and laughing at stupid jokes and pretending to be interested in everything these men said. There wasn’t a name for it back then, but it was at that first party that I became a Swallow: a woman who uses her God-given talents to gain information—talents I’d been accumulating since puberty, had refined in my twenties, and then perfected in my thirties. These men thought they were using me, but it was always the reverse; my power was making them think it wasn’t.

Our main characters are Olga, Boris Pasternak’s longtime mistress; Irina, a Russian American who gets a job as a typist for the CIA; and Sally, an accomplished spy who takes Irina under her wing. These characters were all fine, likeable enough, but none of the three ever really captured my attention or heart. They were just there, and that does not make for an exciting read. Also, I never felt that the two stories truly connected. The only link was the book, Doctor Zhivago, and that was a very thin link, as Sally and Irina didn’t have a whole lot to do with that. Most of their story involved how it was to be a female spy at the time, and it also was a love story as Sally and Irina fall in love, in a time period where it was not accepted to be gay.

“I wrote the book to be read, Olga. This could be its only chance. I’m ready to accept the consequences, whatever they may be. I’m not afraid of what they might do to me.”

I have not read Boris Pasternak’s Doctor Zhivago, but I’m not sure that that made a difference here. Some of what Boris and Olga’s discussions were about I didn’t quite grasp as much as I would have, had I read Doctor Zhivago, but I never felt that I was missing out, and more importantly, I did not finish The Secrets We Kept and felt like I needed to race out and read (or watch the movie!) Doctor Zhivago.

4 thoughts on “Book Review: The Secrets We Kept by Lara Prescott”