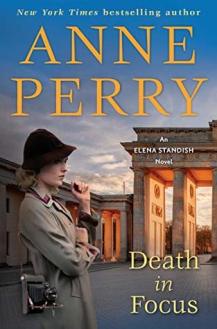 Official Synopsis from Goodreads: In the start of an all-new mystery series set in pre-World War II Europe, an intrepid young photographer carries her imperiled lover’s final, urgent message into the heart of Berlin as Hitler ascends to power.

On vacation from London on the beautiful Italian coast, twenty-eight-year-old Elena Standish and her older sister Margot have finally been able to forget some of the lasting trauma of the Great War. Touring with her camera in hand, Elena has found new inspiration in the striking Italian landscape, and she’s met an equally striking man named Ian. Not ready to part from one another, she and Ian share a train trip home to England. But a shocking murder disrupts their agenda, forcing Elena to personally deliver a message to Berlin that could change the fate of Europe.

Back home, Elena’s diplomat father and secretive grandfather–the former head of MI6, unbeknownst to his family–are involved in their own international machinations. Working behind the scenes as Elena tries to complete her mission on the ground, they interfere with a crucial political rally for one of Germany’s most outspoken fascists. With Adolf Hitler and the Third Reich on the rise, and Elena caught in the middle of an international incident, anyone she encounters might be part of a deadly plot.

In the first novel of a riveting new series by bestselling author Anne Perry, family secrets merge with suspense on the world stage, and Elena learns that, in these complicated times, no one can be trusted, and she must learn to rely only on herself.

***I received an eARC copy of Death in Focus from the publisher, Ballantine Books, via NetGalley***

Review: Started out good, but turned tedious and slow. This one was a miss for me! Death in Focus is the first book in a new series by the mystery writer Anne Perry. I’m a big fan of Perry’s mysteries, specifically the Charlotte and Thomas Pitt books and also the William Monk books, but this book I just did not connect with.

Death in Focus is set in 1933, as Hitler is coming into power and Nazi ideology is taking shape. One main character is Elena, who is caught up with a gentleman who is then murdered, and Elena tries to pass on the message the gentleman was trying to deliver in Berlin. Another main character is Lucas Standish, Elena’s grandfather, who was a former head of MI6. Lucas is still somewhat informed of goings-on around the globe, and so he is involved remotely, as he’s in England and Elena travels from Italy to Berlin.

I liked both of these characters. Elena was plucky and determined, while Lucas was steadfast and calm. I feel like we’ve only scratched the surface in terms of Lucas’s character, as a former head of MI6 he was shrouded in mystery.

The problem with this book wasn’t with the characters, however, it was with the story. It went downhill and got boring quickly! How can a story of a person being framed for murder and being on the run in the early stages of Nazi Germany be boring? But this book has succeeded! The ending got a bit better but the whole plot was flimsy and far-fetched. Besides the main characters of Elena and Lucas (who aren’t even in the same country for the majority of the book), I had trouble keeping everyone straight. Elena meets man after man in this book (she meets one in Italy, another on a train, another in Germany, etc etc), and I kept getting them all mixed up in my mind. None of them had a backstory that stuck with me, so I kept getting confused.

Besides having too many indistinct characters, there was also too much conversation. These conversations would slow down the pace, and I found myself drifting away mentally during these scenes. Which is quite rare for me. Typically I prefer more conversation and less action, but it didn’t work for me here.

I love Anne Perry’s other mysteries, and I did enjoy the two main characters so even though this one was a miss for me, I would read another book in this series. While it was heavy handed and preachy at times, I can see how the stage has been set for some promising stories to come!

Bottom Line: Slow and tedious, but I’m cautiously optimistic for the series as a whole!

Does this sound like a mystery series you’ll be reading?