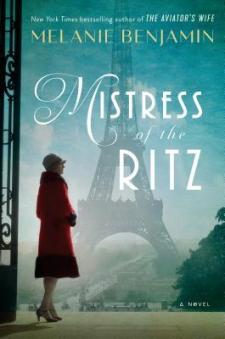 Official Synopsis from Goodreads: A captivating novel based on the story of the extraordinary real-life American woman who secretly worked for the French Resistance during World War II–while playing hostess to the invading Germans at the iconic Hotel Ritz in Paris–from the New York Times bestselling author of The Aviator’s Wife and The Swans of Fifth Avenue.

Nothing bad can happen at the Ritz; inside its gilded walls every woman looks beautiful, every man appears witty. Favored guests like Ernest Hemingway, F. Scott Fitzgerald, Coco Chanel, and the Duke and Duchess of Windsor walk through its famous doors to be welcomed and pampered by Blanche Auzello and her husband, Claude, the hotel’s director. The Auzellos are the mistress and master of the Ritz, allowing the glamour and glitz to take their minds off their troubled marriage, and off the secrets that they keep from their guests–and each other.

Until June 1940, when the German army sweeps into Paris, setting up headquarters at the Ritz. Suddenly, with the likes of Hermann Goring moving into suites once occupied by royalty, Blanche and Claude must navigate a terrifying new reality. One that entails even more secrets. One that may destroy the tempestuous marriage between this beautiful, reckless American and her very proper Frenchman. For the falsehoods they tell to survive, and to strike a blow against their Nazi “guests,” spin a web of deceit that ensnares everything and everyone they cherish.

But one secret is shared between Blanche and Claude alone–the secret that, in the end, threatens to imperil both of their lives, and to bring down the legendary Ritz itself.

Based on true events, Mistress of the Ritz is a taut tale of suspense wrapped up in a love story for the ages, the inspiring story of a woman and a man who discover the best in each other amid the turbulence of war.

***I received an eARC copy of Mistress of the Ritz from the publisher, Delacorte Press, via NetGalley***

Review: An intriguing premise, but fails to fully captivate. Mistress of the Ritz is the latest release from one of my favorite authors, Melanie Benjamin. I went into this read with extremely high expectations. It’s Melanie Benjamin! It’s WWII! It’s Paris! There’s secrecy and drama and the Ritz! And while the setting was quite wonderful and immersive, I never fully connected with the characters and ended up struggling with this read.

Told in alternating point of view (POV) chapters by both Blanche and Claude, with a couple of random chapters by a character named Lily, I found the narrative style confusing. Claude’s chapters start out in 1923, when he meets Blanche, and work towards WWII. Blanche’s chapters start in 1940 as the Nazis invade Paris. While Blanche’s chapters are set after Claude’s, Blanche spends much of her chapters looking back at the past, and this really confused me. I usually love a multiple POV style with a back-and-forth in time narrative, but I had a lot of trouble tracking when/who/what at the beginning of this book. Why not just tell the story chronologically rather than bounce back and forth? Once Claude’s chapters caught up to Blanche’s, Mistress of the Ritz became much easier to follow, but by then I was too frustrated with the choice to write the book this way.

Blanche and Claude are our main characters, and they certainly were interesting characters! Blanche is the loud American who speaks her mind, and Claude has old-fashioned ideas about gender roles and marriage. Once married he assumes Blanche will do all of the cooking and cleaning (she does not), and that Blanche will be quite alright with him having a mistress (she is not). Claude becomes manager at the Ritz, and Blanche helps him with his job by giving him various pointers and ideas, and soon she’s set up in the bar acting as a social director for the hotel, and making friends with many of the guests.

Blanche and Claude have a marriage of passion and violence, and I struggled with them and their relationship. It never seemed that they actually liked each other, and I didn’t like either of them, but they certainly made a good team when it came to the hotel! As Blanche and Claude go through many ups and downs together, Blanche meets Lily, a mysterious woman that draws Blanche into a dangerous web. I think I was supposed to be more intrigued by Lily than I actually was, and sadly, I was not all that interested in Blanche, Lily, or Claude’s war time activities. Coco Chanel makes several appearances here, and it does show her ties to Germany and questionable actions.

The drama and the characters themselves both failed to draw me in, and left many unanswered questions. How exactly did Blanche and Lily meet? One day, Lily is just there. This section was told as a flashback in a Blanche chapter, and here’s an instance where the reminiscing just confused me. I also made the mistake of googling Blanche and Claude Auzello about halfway through the book, and if you don’t already know their story, please don’t look it up. I think this is a book where it plays best if you don’t know anything about the characters and how their story ends. And speaking of the ending of the book, without spoiling anything, I was confused and unsure how I was to take the ending.

While this was historically fascinating, unfortunately, it had so many unanswered questions and unlikable characters and I just couldn’t connect to it. I’m glad I read Mistress of the Ritz, as I learned a lot from this read, but this one just wasn’t for me. It’s not a bad book, it just didn’t fully captivate me and I didn’t care about the characters.

Bottom Line: Should’ve been more interesting than it was.

Does this sound like a good read? Have you read other books by Melanie Benjamin? Are you familiar with the Auzellos story?