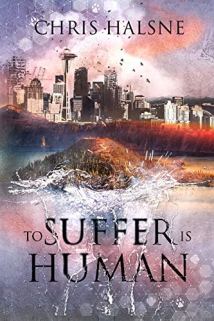 Official Synopsis from Amazon: A violent animal-rights army ends the days of “do no harm.”
When federal agent, Nolan Burke, uncovers the charred remains of two dead college students, he suspects animal-rights extremists are responsible. His best friend, a meat-eating Seattle TV reporter, understands the bizarre subculture better than anyone. Their discovery of a plot to extinguish humans, so animals can inherit the Earth, leads the pair on a dangerous journey around the Pacific Northwest.

***I received an eARC copy of To Suffer Is Human from the author, Chris Halsne. Chris is a relative of my sister-in-law.***

Review: Smart and strong, with a high stakes ending! To Suffer Is Human by Chris Halsne is a great thriller. I don’t read a lot of thrillers, but this one sucked me in, and I really enjoyed it!

As the official synopsis doesn’t tell us too much about the plot, let me tell you more about the book and the characters. Set in the present day Pacific Northwest, Cole is a TV reporter who is always looking for a story. His friend, Nolan, an arson investigator with the US Forest Service, stumbles across some dead bodies during an investigation. Cole and Nolan team up to find out who was behind these murders, as things aren’t adding up, and Cole’s got contacts that can help. What they discover turns out to be a bonkers plot (and I mean that in the best possible way) to mess with the world’s water supply so humans are wiped out and the animals remain. Cole and Norman travel around the PNW to try to solve the crime and stop the bad guys, and there is one stunning scene in particular that takes place at Crater Lake. Crater Lake happens to be one of my favorite places, and I was on the edge of my seat during this scene! Now since the goal is worldwide destruction of the water supply, there are also scenes set in Russia at Lake Baikal, and these scenes were fascinating as well!

You can really tell that the author, Chris Halsne, did a tremendous amount of research for this book. I read a lot of murder mysteries, and I’m almost always interested in the “why” of the crime, and not so much the “how”, but in this read I was fascinated by the “how”. I was amazed and quite frankly a bit scared at the thought of a crime like this. This book will have you stocking up on your drinking water and looking at maps and reading up on the world’s water supply.

While we see a lot of the good guys, Cole and Nolan, we also get to see into the minds of the criminals. And wow, are they nasty! Dr Dell, our main big bad, is all sorts of awful, and his cronies are just as bad, if not more evil. Some of these characters were hard to read about, as they are so evil, but there were also some human moments with some of the villains where we learn why they think what they think and do what they do, and it’s just another element to a good story.

Now on to the good guys! Cole and Nolan are both good, solid guys to read about. As Cole is a TV reporter, there was a lot of newsroom talk and a news focus that I found unique and interesting. I’ve never read a book with this particular focus before, and as the author has a tremendous amount of experience with the news, that experience really shows here and made this read feel authentic and believable.

Now where I thought the book struggled a bit was in the lack of female characters. It takes a bit, almost the first half of the book, for the women to have a role in the story other than victim or girlfriend. Cole’s girlfriend, Montana, was enjoyable with her tough-as-nails strength, but she’s got a side plot with some Russian gangsters that detracted from the main story. Another female character is Wynona, a scientist working with the bad guys, and she was so insanely crazy evil and over-the-top, but I still enjoyed her story, and the more I read about her, the more intrigued I got by her character. Another character I really enjoyed, who made a massive impact with a very short time on the page, was Cole’s sister Mary Lee. Mary Lee is a computer genius, and her interactions with Cole and Nolan were great and really sparkled. I enjoyed her character and wish she had been in the book more!

Another problem I had with the book was that I felt it was too long. It could’ve been shortened a bit, with perhaps cutting some of Montana’s side plot, or even not giving the villains as much page time as they got.

So, all in all I really enjoyed To Suffer Is Human, and while I don’t read a whole lot of thrillers, this one kept me on the edge of my seat and I’d love to read more stories involving these characters!

Bottom Line: A compelling plot and likeable characters makes for one exciting thriller!

***Click the book cover below to head to Amazon to purchase the book! The Amazon link is an affiliate link which means I receive a small commission if you click the link and make a purchase***

Does this sound like a good read? Do you enjoy reading thrillers? Have you ever been to Crater Lake?

4 thoughts on “ARC Review: To Suffer Is Human by Chris Halsne”