In This Grave Hour by Jacqueline Winspear (Maisie Dobbs #13) 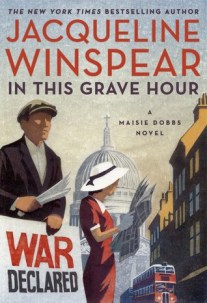 Official Synopsis from Goodreads: Sunday September 3rd 1939.  At the moment Prime Minister Neville Chamberlain broadcasts to the nation Britain’s declaration of war with Germany, a senior Secret Service agent breaks into Maisie Dobbs’ flat to await her return. Dr. Francesca Thomas has an urgent assignment for Maisie: to find the killer of a man who escaped occupied Belgium as a boy, some twenty-three years earlier during the Great War.

In a London shadowed by barrage balloons, bomb shelters and the threat of invasion, within days another former Belgian refugee is found murdered.  And as Maisie delves deeper into the killings of the dispossessed from the “last war,” a new kind of refugee — an evacuee from London — appears in Maisie’s life. The little girl billeted at Maisie’s home in Kent does not, or cannot, speak, and the authorities do not know who the child belongs to or who might have put her on the “Operation Pied Piper” evacuee train.  They know only that her name is Anna.

As Maisie’s search for the killer escalates, the country braces for what is to come.  Britain is approaching its gravest hour — and Maisie could be nearing a crossroads of her own.

My copy came from: I borrowed the hardback from my local library.

Mini Review: I really enjoyed this entry in the Maisie Dobbs series. I was thrilled to hear of Inspector Stratton again (more please!!), and I thought the mystery was mostly compelling and easy to follow. As always, the history really shines in this series, and I found myself so worried for the characters we’ve come to know and love over the years as WWII begins.

To Die But Once by Jacqueline Winspear (Maisie Dobbs #14) 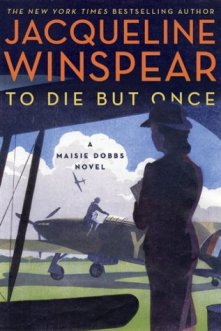 Official Synopsis from Goodreads: Spring 1940. With Britons facing what has become known as “the Bore War”—nothing much seems to have happened yet—Maisie Dobbs is asked to investigate the disappearance of a local lad, a young apprentice craftsman working on a “hush-hush” government contract. As Maisie’s inquiry reveals a possible link to the London underworld, another mother is worried about a missing son—but this time the boy in question is one beloved by Maisie.

My copy came from: I borrowed the hardback from my local library.

Mini Review: So, you know how I was so happy that Stratton entered the picture again in the previous book? Well, he doesn’t appear here at all, so I was really irritated. I absolutely ship Maisie and Stratton, and have since the beginning of the series, so I was quite disappointed to not read about him at all in this entry. History wise, this is a fascinating novel that deals a lot with Dunkirk, as several characters we’ve met over the years are involved in different ways with that, and I was on the edge of my seat with those plotlines. With the main mystery however? Not so much. I found there to be too many characters, and the mystery was hard to follow, and I just plain didn’t care about why the person was killed. I was too wrapped up in the main characters personal lives and the outcome of Dunkirk to care about the mystery they were investigating. I am so worried about what is to come in this series!

And be on the lookout soon (well, probably next month) for my review of the latest Maisie Dobbs, The American Agent. I had to quickly read these last two books so I could be ready for the new release. I went to a Jacqueline Winspear talk and book signing at my local bookstore last week, and wanted to be caught up on this series before I went! I can’t wait to pick up The American Agent, but my heart is heavy with fear for what will come for the characters, as the Blitz is about to begin in the books.

Are you a fan of the Maisie Dobbs series? Do you enjoy reading mysteries set during WWII?