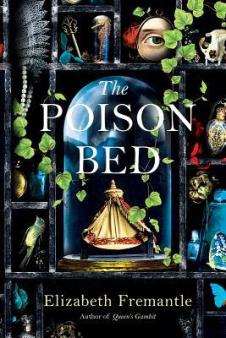 Official Synopsis from Goodreads: Elizabeth Fremantle’s THE POISON BED is a chilling, noirish thriller ripped straight from the headlines.

A king, his lover and his lover’s wife. One is a killer.

In the autumn of 1615 scandal rocks the Jacobean court when a celebrated couple are imprisoned on suspicion of murder. She is young, captivating and from a notorious family. He is one of the richest and most powerful men in the kingdom.

Some believe she is innocent; others think her wicked or insane. He claims no knowledge of the murder. The king suspects them both, though it is his secret at stake.

Who is telling the truth? Who has the most to lose? And who is willing to commit murder?

***I received an eARC copy of The Poison Bed from the publisher, Pegasus Books, via NetGalley***

Review: Full of unlikeable characters and scheming! This was not the book for me. The Poison Bed by Elizabeth Fremantle was a read that I requested on NetGalley because the cover was just so darn beautiful. The synopsis sounded pretty good, too, as I love a good historical mystery. However, this book just was not the one for me!

The chapters are narrated by “Her” (Frances Howard) and “Him” (Robert Carr), with the “Her” chapters told in a combination of both first person and third person, as Frances narrates her story to a midwife, and the “Him” chapters are told in third person. I didn’t care for this narration style. First off, the chapter titles of “Her” and “Him” bugged me. There is zero mystery as to who “Her” and “Him” refer to, so why couldn’t their names have been used instead? Also, with the shifting third person to first person in the “Her” chapters, I found it confusing and jarring, and when the shift happened I’d be thrown for a few paragraphs before getting back into it.

Frances and Robert are both interesting but unlikeable characters. Frances is a scheming, power hungry woman, and Robert shares the king’s bed, but has his own goals and plans. Frances and Robert fall in love, and The Poison Bed tells of their romance and the mystery of the murder of Thomas Overbury, who was very close friends with Robert. The Poison Bed is based on a true story. Frances Howard and Robert Carr did get married, Thomas Overbury was murdered, and Frances and Robert were both imprisoned for his murder. I think that even if you already know the history of the scandal, you’d still find the plot of this story interesting. I read up on it a bit before starting this book, and the plot still intrigued me. And you know I can’t reveal if it ends the same way history does!

While I was interested in the story, the lack of decency by any of the characters was tough for me to read. I couldn’t root for anyone to succeed or survive, as they were all just so awful to each other. Everyone seemed to have a secret lover, and they were all so devious, scheming, and lacking in basic humanity that I didn’t care what happened to any of the characters. I didn’t react when a bad character met a bad end, and I didn’t react when a bad character got a good end. I just flat out did not care what happened, and that was my main problem with the book. There were moments of surprise for me, the Jacobean setting was interesting, and I did read this fairly quickly, so I know that there are readers out there who will really enjoy this, it just wasn’t a read for me! I need me some likable characters in my books!

Bottom Line: Too many unlikable characters and scheming for me!

8 thoughts on “ARC Review: The Poison Bed by Elizabeth Fremantle”