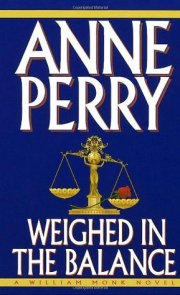 When Countess Zorah Rostova asks London barrister Sir Oliver Rathbone to defend her against a charge of slander, he is astonished to find himself accepting. For, without a shred of evidence, the countess insists that the prince of her small German principality was murdered by his wife, the woman who was responsible for his exile twenty years before. Though private investigator William Monk and his friend Hester Latterly, manage to establish that the prince was indeed murdered, as events unfold the likeliest suspect seems to be Countess Zorah herself. . . .

Genre: Historical Mystery
Setting: Victorian London
My copy came from: I got a used paperback from PaperBackSwap

Review: A slow start with a riveting ending! Weighed in the Balance by Anne Perry is the seventh book in the William Monk mystery series set in Victorian London. William Monk is a private investigator, and he’s friends with nurse Hester Latterly and barrister Sir Oliver Rathbone. Monk isn’t really the focus of this mystery, as we are mainly focused here on how Rathbone will handle the slander case that arrives on his doorstep. A visiting countess, the Countess Zorah Rostova accuses another woman, Princess Gisela of Felzburg, of murdering her (the princesses) husband, Prince Friedrich. Zorah doesn’t offer anything in the way of proof, and so Rathbone sends Monk out to the “scene of the crime” in order to investigate if there was murder and what exactly happened.
As Rathbone and Monk are occupied with Zorah’s case, Hester finds herself nursing a young man who has been paralyzed from an illness. The young man and his family are originally from Felzburg, where the Countess and Princess are from, so Hester gathers lots of information from the family she’s working for to help with Rathbone’s case.

“You have a very keen interest in politics, Miss Latterly.”

“In people, Baron Ollenheim. And I have seen enough of war to dread it anywhere, for any country.”

“Do you not think there are some things worth fighting for, even if it means dying?” he said slowly.

“Yes. But it is one thing to judge the prize worth someone else’s life, and another judging it worth your own.”

There was so much buildup in this book. Way too much buildup. The beginning was far too boring, with basically a rundown of all the necessary characters, and how they connected with each other, and which political affiliations they had. One of the main focuses of the murder investigation deals with the unification of Germany, as Felzburg is in the process of deciding if they want to go to war over their independence, or if they want to be part of the unification. There is also a short side trip to Venice, which is under Austrian rule at this time, and there are some similar sentiments there, too, as the Italian unification gains traction. I found these political dealings and discussions quite fascinating, and the historical details like this are just one of the reasons I love Anne Perry’s mysteries and why I refused to set this book aside, even though it really took a long time for everything to start clicking.
Luckily, with all of this buildup, there was a great payoff. I love a great courtroom scene, and the second half of the book is pretty much all set in the courtroom, as Rathbone tries to work the case and solve the mystery. If I recall the other books correctly, this one felt like it was the most “legal focused” of the series so far, as Rathbone felt like the main character here, and Monk felt like an afterthought. Which was fine. Monk in this entry is romancing a married woman, and while this relationship I think sparked a change in Monk, I still didn’t want to read about it. Here’s hoping that we get more Monk and Hester in the next entry!

Bottom Line: Takes a while to get going but it’s historically fascinating and has some great courtroom scenes.

Are you a fan of Anne Perry’s books? Which series do you prefer: William Monk or Charlotte and Thomas Pitt?

7 thoughts on “Book Review: Weighed in the Balance by Anne Perry (William Monk #7)”