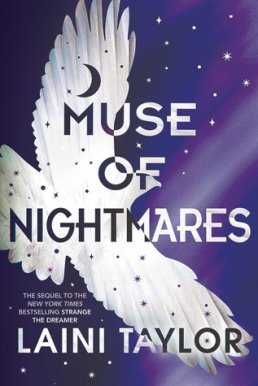 Official Synopsis from Goodreads: In the wake of tragedy, neither Lazlo nor Sarai are who they were before. One a god, the other a ghost, they struggle to grasp the new boundaries of their selves as dark-minded Minya holds them hostage, intent on vengeance against Weep.

Lazlo faces an unthinkable choice—save the woman he loves, or everyone else?—while Sarai feels more helpless than ever. But is she? Sometimes, only the direst need can teach us our own depths, and Sarai, the muse of nightmares, has not yet discovered what she’s capable of.

As humans and godspawn reel in the aftermath of the citadel’s near fall, a new foe shatters their fragile hopes, and the mysteries of the Mesarthim are resurrected: Where did the gods come from, and why? What was done with thousands of children born in the citadel nursery? And most important of all, as forgotten doors are opened and new worlds revealed: Must heroes always slay monsters, or is it possible to save them instead?

Love and hate, revenge and redemption, destruction and salvation all clash in this gorgeous sequel to the New York Times bestseller, Strange the Dreamer.

Genre: Fantasy
My Copy Came From: I purchased the hardback from Amazon.

Review: A good read, but I didn’t love it as much as Strange the Dreamer. Muse of Nightmares by Laini Taylor is the second book in the Strange the Dreamer duology. I like the idea behind a duology. I like that there’s enough time to do some solid world building and to fully flesh out the characters, but not too much time where there’s a lot of extra filler that happens. The great world building and character development happens in this duology, and there’s something so enchanting and mysterious about Taylor’s world of Weep, where this duology is set. It’s creepy and beautiful, sad and wondrous, and full of magic and learning. My favorite thing about this duology is definitely the world that it is set in! Weep is a setting that fills my head with so many escapist images, and when I read this duology, I can set aside the real world and dive right in to the fictional world of Weep. I love it when books can do that!

All their lives they’d been trapped in this prison in the sky, unable to escape or flee or even close the doors. They’d lived with the certainty that sooner or later the humans would come and blood would flow. Until last week, they’d been sure it would be their blood. Minya’s army changed that. Now, instead of dying, they would kill. And what would their lives be then? They would still be trapped, but with corpses for company, and hate and fear that weren’t a legacy left by their parents, but new and bright and all their own.

Unfortunately, while the setting pulled me right back into the book, I had a difficult time connecting to the characters this time around. Muse of Nightmares starts out by bringing two new characters into the story, sisters Kora and Nova, and I think these characters should’ve been introduced in book one. Since their story was so important, I would’ve felt more of an impact had I known their characters since the beginning, and had more time with them. Taylor could’ve weaved small parts of their story into the first book without making it too much longer, for a more balanced story. Kora and Nova are both fascinating characters, and I think their story deserved a bit more page time.

The heart of the citadel ate sound, and when Minya screamed in here, it seemed to eat her rage, too, though she could never scream long enough to pour all of it out. Her voice would die before she ran out of rage. She could scream a hole in her throat and come unraveled, fall to pieces like moth-chewed silk, and still, from the leftover shreds of her, the little pile of tatters, would pour forth this unending scream.

Our characters from book one are all back and for some reason I just couldn’t really connect with them. I loved Lazlo and Sarai in Strange the Dreamer, but here I just felt kind of “meh” about them. Plus there was weird ghost sex, and that was just a bit over the top for me. If Lazlo and Sarai are able to interact the same here as in the first book, then what was the fallout of Sarai dying at the end of Strange the Dreamer? Just that Minya could control her? This whole plot point while effective in Strange the Dreamer just felt overwrought and forced here, and honestly didn’t really amount to much.

We see more into Minya’s thoughts, and get her full story, and the book plays with ideas about villains and heroes. It’s not a spoiler to say that Minya is not the only villain here, and the story shifts into something different once the other villain comes into play.

“And I suppose all the wishes come true,” Minya said, sarcastic.

“Of course not, silly girl,” Suheyla retorted. She had not grown up in an era of optimism, but that didn’t mean they lived without dreams. “Wishes don’t just come true. They’re only the target you paint around what you want. You still have to hit the bull’s-eye yourself.”

It took me until about page 200 to get into the story and really get interested in the plotting. There was a tad too much description here – it just needed to be taken down a notch. I love descriptive, flowery writing sometimes, and while I loved the writing style in Strange the Dreamer, it felt a bit much in this entry. So, I didn’t love Muse of Nightmares as much as I loved Strange the Dreamer. It was a little too odd, slightly too grotesque, and too predictable for me. I enjoyed it, but it didn’t capture my heart the way Strange the Dreamer did.

Bottom Line: A good end, but just not as enjoyable as Strange the Dreamer.

6 thoughts on “Book Review: Muse of Nightmares by Laini Taylor (Strange the Dreamer #2)”