Official Synopsis from Goodreads: In the bestselling tradition of Bill Bryson and Tony Horwitz, Rinker Buck’s “The Oregon Trail” is a major work of participatory history: an epic account of traveling the 2,000-mile length of the Oregon Trail the old-fashioned way, in a covered wagon with a team of mules–which hasn’t been done in a century–that also tells the rich history of the trail, the people who made the migration, and its significance to the country.

Spanning 2,000 miles and traversing six states from Missouri to the Pacific Ocean, the Oregon Trail is the route that made America. In the fifteen years before the Civil War, when 400,000 pioneers used it to emigrate West–historians still regard this as the largest land migration of all time–the trail united the coasts, doubled the size of the country, and laid the groundwork for the railroads. The trail years also solidified the American character: our plucky determination in the face of adversity, our impetuous cycle of financial bubbles and busts, the fractious clash of ethnic populations competing for the same jobs and space. Today, amazingly, the trail is all but forgotten.
Rinker Buck is no stranger to grand adventures. “The New Yorker “described his first travel narrative, “Flight of Passage,” as “a funny, cocky gem of a book,” and with “The Oregon Trail “he seeks to bring the most important road in American history back to life. At once a majestic American journey, a significant work of history, and a personal saga reminiscent of bestsellers by Bill Bryson and Cheryl Strayed, the book tells the story of Buck’s 2,000-mile expedition across the plains with tremendous humor and heart. He was accompanied by three cantankerous mules, his boisterous brother, Nick, and an “incurably filthy” Jack Russell terrier named Olive Oyl. Along the way, Buck dodges thunderstorms in Nebraska, chases his runaway mules across miles of Wyoming plains, scouts more than five hundred miles of nearly vanished trail on foot, crosses the Rockies, makes desperate fifty-mile forced marches for water, and repairs so many broken wheels and axels that he nearly reinvents the art of wagon travel itself. Apart from charting his own geographical and emotional adventure, Buck introduces readers to the evangelists, shysters, natives, trailblazers, and everyday dreamers who were among the first of the pioneers to make the journey west. With a rare narrative power, a refreshing candor about his own weakness and mistakes, and an extremely attractive obsession for history and travel, “The Oregon Trail” draws readers into the journey of a lifetime.

Genre: Nonfiction, Memoir, History
Setting: Follows the Oregon Trail as it winds through Missouri, Kansas, Nebraska, Wyoming, Idaho, and Oregon. Modern day setting with historical tidbits about the 1800s.
My Copy Came From: I purchased the paperback from Amazon.

Review: A fascinating, dusty read that will make you want to hit the open trail. The Oregon Trail sounds like it would be a dry read, but it is actually quite fun. This was a book club read for me, one that I probably would not have picked up otherwise, and I ended up really enjoying this read! That’s the great thing about book clubs, they get you to pick up something you might not otherwise select, and this time it worked out well.

Travel became my endorphin. In a covered wagon, while riding slowly out in the open air, every blade of grass, every fence post and farm, or the mallard ducks rising from the streams, assumes a visual and olfactory intensity that you can never feel while trapped inside a speeding car. While on a wagon seat, the land embraces you, emotionally. The rumbling wheels, the creaking top, and the pull of the driving lines in your hands multiply the pleasure of travel. A part of me would always long for that strength of feeling again, and no other form of travel could match it.

The Oregon Trail is written by Rinker Buck, and Rinker and his brother Nick set out to travel the Oregon Trail in a, for the most part, historically accurate wagon. Rinker chooses to use mules to pull the wagon, not the typically thought of oxen, and the mules Bute, Beck, and Jake are characters themselves, and they are absolutely fascinating to read about! Who knew mules could be so interesting?? Besides Rinker, Nick, and the mules, there’s a Jack Russell terrier named Olive Oyl who tags along as well. Reading about this team of characters and how they all interact was a lot of fun.

I do not believe in organized religion, herbal remedies, yoga, Reiki, kabbalah, deep massage, slow food, or chicken soup for the soul. The nostrums of Deepak Chopra and Barbara De Angelis cannot rescue people like me.

As they head along the trail, the book talks about all of the history of the trail: the people who traveled it, the way it was traveled, the change it brought about to the country, the death and trouble along the trail, but also the beauty of the trail. It really made me want to see the trail and do some exploring, and these historical sections were truly fascinating. I kept thinking, “how did I not know this” and “this wasn’t in the Oregon Trail computer game” and also, “how on earth did these people do this”. You’ll come away from this read with a respect for those who dared to travel the trail and you may find yourself digging up the old Oregon Trail computer game to see if you survive (I always died of dysentery).

Bottom Line: A fun read that will give you a new appreciation for those who traveled the trail. 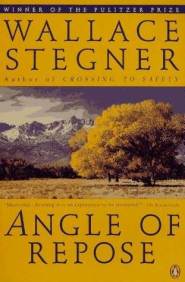 6 thoughts on “Book Review: The Oregon Trail by Rinker Buck”