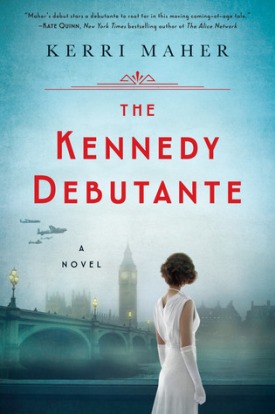 Official Synopsis from Goodreads: A captivating novel following the exploits of Kathleen “Kick” Kennedy, the forgotten and rebellious daughter of one of America’s greatest political dynasties. London, 1938. The effervescent “It girl” of London society since her father was named the ambassador, Kathleen “Kick” Kennedy moves in rarified circles, rubbing satin-covered elbows with some of the 20th century’s most powerful figures. Eager to escape the watchful eye of her strict mother, Rose, the antics of her older brothers, Jack and Joe, and the erratic behavior of her sister Rosemary, Kick is ready to strike out on her own and is soon swept off her feet by Billy Hartington, the future Duke of Devonshire. But their love is forbidden, as Kick’s devout Catholic family and Billy’s staunchly Protestant one would never approve their match. When war breaks like a tidal wave across her world, Billy is ripped from her arms as the Kennedys are forced to return to the States. Kick gets work as a journalist and joins the Red Cross to get back to England, where she will have to decide where her true loyalties lie–with family or with love . . .

***I received an eARC copy of The Kennedy Debutante from the publisher, Berkley, via NetGalley***

Review: Fascinating history, but the story drags in places. The Kennedy Debutante by Kerri Maher tells the story of Kathleen “Kick” Kennedy, one of JFK’s younger sisters. Kick is aptly named, and she really lights up the page. She’s no-nonsense, clever, and can charm anyone! She’s one of those fascinating characters to read about, and I enjoyed reading about her.

Early on, Kick falls in love with a man named Billy Hartington. Now Kick and the Kennedy family are all devout Catholics. Billy is very much a Protestant, and the families don’t see eye to eye with this match. So much of the book focuses on Kick trying to decide if she should put aside her religion (and also her family), or lose out on love. I was truly surprised to see so much religious dilemma in this read. Kerri Maher makes this dilemma mostly interesting, with both sides and what it means for each family understandable. Because there is so much of a focus on this sticky situation, it does end up dragging in places and I found myself skimming over parts of this.

Along with the religious dilemma, we see glimpses into the Kennedy household, and get a closer view of Kick’s mother, Rose Fitzgerald Kennedy, and her intense drive for success. We also learn about Rosemary, Kick’s older sister, and read her sad story. We grow closer to Kick’s father, Joseph Kennedy Sr., and also her oldest brother, Joe Kennedy Jr. JFK also makes his expected dazzling appearances, and is charming as ever.

Besides being a book about Kick and her family, this is also a WWII book. As Kick’s father was the US Ambassador to the United Kingdom from 1938 to 1940, there is much here about Joseph Kennedy Sr.’s thoughts about not getting involved in war, and the anger that the UK felt towards the US about that. I found the WWII parts interesting, and different from other WWII books that I’ve read. Kick works for the Red Cross in parts of the book, and it was interesting to read about her work duties.

So much of the Kennedy stories are known already, and you can read about them online if you’re interested in knowing where the story will end up instead of going into The Kennedy Debutante blind. I did read Kick’s Wikipedia page before getting too far into this book, and so because I knew how Kick’s real story ended, I was surprised at where The Kennedy Debutante ended. The book felt a bit unfinished to me, and I’d certainly be interested in reading another book by this author based on the Kennedy family. (I have no idea if there are plans for a companion book, or sequel of sorts to this read, but I feel that one would work, and would be interesting).

Bottom Line: Fascinating history and readable characters, but the book does drag in places.

2 thoughts on “ARC Review: The Kennedy Debutante by Kerri Maher”

Leave a Reply to Grab the Lapels Cancel reply