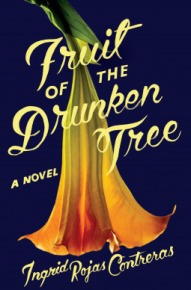 Official Synopsis from Goodreads: In the vein of Isabel Allende and Gabriel Garcia Marquez, a mesmerizing debut set against the backdrop of the devastating violence of 1990’s Colombia about a sheltered young girl and a teenage maid who strike an unlikely friendship that threatens to undo them both.

The Santiago family lives in a gated community in Bogotá, safe from the political upheaval terrorizing the country. Seven-year-old Chula and her older sister Cassandra enjoy carefree lives thanks to this protective bubble, but the threat of kidnappings, car bombs, and assassinations hover just outside the neighborhood walls, where the godlike drug lord Pablo Escobar continues to elude authorities and capture the attention of the nation.

When their mother hires Petrona, a live-in-maid from the city’s guerrilla-occupied slum, Chula makes it her mission to understand Petrona’s mysterious ways. But Petrona’s unusual behavior belies more than shyness. She is a young woman crumbling under the burden of providing for her family as the rip tide of first love pulls her in the opposite direction. As both girls’ families scramble to maintain stability amidst the rapidly escalating conflict, Petrona and Chula find themselves entangled in a web of secrecy that will force them both to choose between sacrifice and betrayal.

Inspired by the author’s own life, and told through the alternating perspectives of the willful Chula and the achingly hopeful Petrona, Fruit of the Drunken Tree contrasts two very different, but inextricable coming-of-age stories. In lush prose, Rojas Contreras sheds light on the impossible choices women are often forced to make in the face of violence and the unexpected connections that can blossom out of desperation.

***I received an eARC copy of Fruit of the Drunken Tree from the publisher, Doubleday, via NetGalley***

Review: Fascinating historical fiction with compelling characters and wide-eyed childlike wonder. Fruit of the Drunken Tree by Ingrid Rojas Contreras is set in Bogota, Columbia during the time of Pablo Escobar, and is narrated by two different point of view characters. For the most part we get chapters told from the POV of young Chula, a seven-year-old who happens to be one of the most interesting voices and characters that I’ve read this year. We also get some, not as many, POV chapters from Petrona, a teenage maid who works for Chula’s family.

I just adored Chula’s voice. She’s seven, and she’s filled with so much imagination and curiousity. She reminded me somewhat of Scout from To Kill A Mockingbird. Child POV’s can sometimes go drastically wrong, where they sound too immature and whiny (like in Room – not that it was a bad book, it wasn’t. But Jack’s POV was annoying at times). In Fruit of the Drunken Tree, while Chula definitely wasn’t perfect, I never was irritated with Chula and her voice. Chula tends to see something, and then conjure up a story to go with what she sees, from the cows in the field next door, to the lady down the street, to Petrona the maid, to her mother and father, even Pablo Escobar. Her imagination was at times hilarious, but could also be sad, and also be dark. As Chula is seven, many times the reader is left to infer the truth, as Chula is innocent and just doesn’t understand what has happened.

The other POV character, Petrona, I didn’t have as much of a connection to. Petrona is a young teen girl, and she comes from a poor section of town and must work as a maid to help feed her family. The guerrillas come for her brothers, and one by one she loses her brothers to the guerrillas and/or drugs. She starts a relationship with Gorrion, a boy from her town, and I really could not stand Gorrion. He was obviously up to no good, and it was so irritating that Petrona was so blinded by love that she couldn’t see it. Every time Gorrion would appear in the book, I’d just grit my teeth and hope he would go away.

Other main characters are Chula’s older sister Cassandra, and Chula’s mother, Alma. I loved how we only saw glimpses into Alma, and how she was somewhat of a mystery that the reader needed to unravel. We only see her from the POVs of the younger characters, and it’s hard to tell what exactly was going on with her. But, I enjoyed this ambiguity. I also enjoyed the character of Cassandra, and thought her and Chula’s conversations and relationship was hilarious and sweet. They are kids, and it was lovely to read a story with a positive sibling relationship, with two very different girls, but while they are different, they still very much love each other and their parents.

The violence in Columbia and the menacing Pablo Escobar looms over the characters (Escobar never appears in person, but his presence is felt throughout), and while Fruit of the Drunken Tree wasn’t overly graphic, there were some tough scenes that were tough to read because of the context, not because they were too graphic. There is one scene involving Chula’s grandmother and Chula’s cousins that was heartbreaking to read about.

Fruit of the Drunken Tree is a great historical fiction read, one that I truly enjoyed and was fascinated by. I loved Chula’s voice, and she is one of my favorite characters that I’ve read this year.

Bottom Line: I really enjoyed this!

Does this sound like a good read? Who is your favorite character that you’ve read this year?

9 thoughts on “ARC Review: Fruit of the Drunken Tree by Ingrid Rojas Contreras”