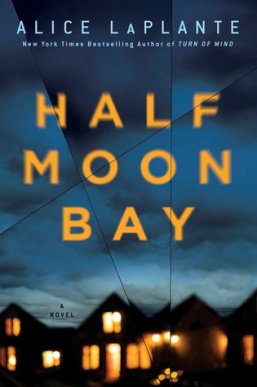 Official Synopsis from Goodreads: A smart, haunting tale of psychological suspense from the award-winning New York Times bestselling author of Turn of Mind.

Jane loses everything when her teenage daughter is killed in a senseless accident. Jane is devastated, but sometime later, she makes one tiny stab at a new life: she moves from San Francisco to the tiny seaside town of Half Moon Bay. She is inconsolable, and yet, as the months go by, she is able to cobble together some version of a job, of friends, of the possibility of peace.

And then, children begin to disappear. And soon, Jane sees her own pain reflected in all the parents in the town. She wonders if she will be able to live through the aching loss, the fear all around her. But as the disappearances continue, she begins to see that what her neighbors are wondering is if it is Jane herself who has unleashed the horror of loss.

Half Moon Bay is a chilling story about a mother haunted by her past. As Stewart O’Nan said about Turn of Mind—this novel “blindfolds the reader and spins her around.”

***I received an eARC copy of Half Moon Bay from the publisher, Scribner, via NetGalley***

Review: A fabulous read that draws you in and doesn’t let go. Half Moon Bay by Alice LaPlante is an enthralling work of psychological suspense. I was hooked from the first page, and the book didn’t disappoint!

Set in the foggy seaside town of Half Moon Bay, California, the setting lends an air of claustrophobia and mystery to the book, and I’m not sure the book would’ve been as powerful if it were set in a different location. We can feel the fog move in, we smell the sea, we sense the chill in the air, and we hear the pounding surf.

Besides the setting drawing the reader in, our main character, Jane, also draws the reader in. Jane is struggling with the death of her teenage daughter, who was killed in an accident, and her grief and pain was so real and raw. Jane’s internal struggle with her grief and daily living was compelling, and I was really rooting for her survival. While Jane wasn’t exactly likable, she makes some disturbing decisions throughout the book, she just felt exceedingly real. Her story is somewhat unreliable, as the reader never quite knows what exactly is going on as small details shift, stories change, and the mystery builds. I love this type of book, so was instantly captivated with trying to figure everything out.

Other characters in the novel are married couple Edward and Alma, and they were sensual and odd in an invasive way. They tended to appear constantly, and there was an air of the stalker about them. Edward was definitely giving me cult leader vibes as well. Edward and Alma didn’t annoy me, but rather heightened the mystery, but I could see how some readers may find them frustrating and unrealistic as they draw Jane into their web.

Another character is a co-worker of Jane’s, named Adam, and he was also at times kind, and then creepy, and again, almost stalker-like. I enjoyed trying to figure these characters out and my opinions of them all constantly changed throughout the course of the book.

In terms of the mystery, I found the mystery of the missing girls compelling. As young girls begin to disappear and their bodies are found, the story really goes up a notch, and the ending was very suspenseful. There was an abrupt ending to this book, and while I think this ending may put some readers off, I absolutely loved the way it ended. It ended with enough ambiguity for the reader to make their own mind up, but enough clues sprinkled throughout that if you have paid attention to the characters, then you know where the characters go from here. I appreciated the ambiguity and thought it was done well, with just enough for the reader to decipher.

I’d definitely recommend this title to those readers and book clubs that enjoy reading psychological suspense and weighty reads. This tackles heavy topics like grief and the death of children, but is full of discussion points and characters that you will have an opinion about. I loved this book!

Bottom Line: I was enthralled from beginning to end! Excellent psychological suspense!

Does this sound like a book that you’d read? Do you enjoy reading psychological suspense? Have you ever been to Half Moon Bay?

4 thoughts on “ARC Review: Half Moon Bay by Alice LaPlante”