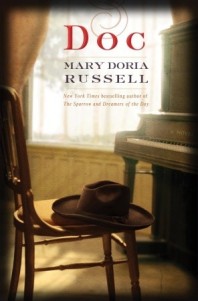 Official Synopsis from Goodreads: Born to the life of a Southern gentleman, Dr. John Henry Holliday arrives on the Texas frontier hoping that the dry air and sunshine of the West will restore him to health. Soon, with few job prospects, Doc Holliday is gambling professionally with his partner, Mária Katarina Harony, a high-strung, classically educated Hungarian whore. In search of high-stakes poker, the couple hits the saloons of Dodge City. And that is where the unlikely friendship of Doc Holliday and a fearless lawman named Wyatt Earp begins–before the gunfight at the O.K. Corral links their names forever in American frontier mythology when neither man wanted fame or deserved notoriety.

Review: Gripping historical fiction with strong characters and fascinating historical detail. Doc by Mary Doria Russell is one of those historical fiction novels that packs a ton of information into it. Each page is full of small details that highlight the setting and characters, and while this attention to detail can sometimes make the story a bit slow, once all of the pieces come together it was just darn good story telling.

The wonder is how long and how well he fought his destiny. He was meant to die at birth. The Fates pursued him from the day he first drew breath, howling for his delayed demise.

Doc tells the story of Doc Holliday, and his life prior to the big O.K. Corral scene. The O.K. Corral doesn’t happen in this book, but it is hinted at as the story builds toward that historic event. I actually went into this read not knowing anything about Doc Holliday, Wyatt Earp, and the big scene. I’ve never watched those western movies that are based on the event, nor have I really ever learned about it, or read any books about it. So I really learned a lot while reading this book! One thing being that Wyatt Earp had a lot of brothers, and his brother Morgan was especially close with Doc Holliday. Another brother of Wyatt’s was named James, and he ran a saloon and brothel with his wife, Bessie. Prostitution was unfortunately the only option unmarried (and even sometimes married!) women had out in the west at this time. The focus on prostitution was fascinating, and Mary Doria Russell weaves the struggle of women and the exploitation by men into the story seamlessly.

If the doves are soiled, who dirtied them? That’s what Bessie wished someone would ask. If the women have fallen, who pushed them? But reformers would go just this far and no farther: lament the sin, but ask no questions.

Besides prostitution, there is gambling, and I was surprised to learn that they didn’t just play poker! Oh no, there were lots of other card games that they played, including faro.

The facts were these. Dodge City did not invent or manufacture goods. Dodge did not raise or educate children. It did not nurture or appreciate the arts. Dodge City had a single purpose: to extract wealth from Texas. Drovers brought cattle north and got paid in cash; Dodge sent them home in possession of neither.

Besides the gambling and prostitution, we learn about dental practices of the time, as Doc is a dentist, and so many of these details add up to really put the reader into the time and place of the story. As this is set in the late 1870s, the Civil War and the aftermath plays a part in many of the scenes, as Dodge City is full of southerners and northerners, and the conflict still is a part of the story. There also is a fair amount of racism present, as the time was full of this behavior, and this book does not shy away from the topic.

And now for the characters. Mary Doria Russell really excels at writing fully fleshed out, realistic characters with both good and bad characteristics. We see humanity here in all of its nastiness and degradation, but we also see kindness, love, and loyalty. We see the best and the worst, and this makes for compelling, realistic characters that the reader can care about. I’m again reminded of Russell’s spectacular WWII novel, A Thread of Grace, and she truly has a marvelous gift of bringing characters to life.

“They break my heart, these girls. They are so brave. Wyatt, you have to admire their nerve, at least! They go off alone into alleys and small rooms with violent, dangerous, lustful men twice their own size… Shall I confess my crime, Marshal?”

“City ordinances be damned,” Doc told him. “I am never entirely disarmed. And I just play cards with the bastards.”

This was a book club read for me, and this book is highly recommended for those book clubs that enjoy reading historical fiction. There is a lot to discuss here, from the characters and their actions to the setting and historical info that is learned. There is so much going on that it took me a little while to get into it, but once it starts clicking, it is full on excitement.

“I wonder what the odds are,” he mused. The numbers seemed to come to him from nowhere. “Eight to five,” he decided. “Against.”

“Me dyin’ of consumption ‘fore another bullet finds me.”

She twisted around and looked at him, eyes serious. “Don’t talk like that, Doc.”

“No hope, no fear,” he said with a grin, kissing her with each word.

There’s a sequel to Doc that is titled Epitaph, and it looks like it includes the big scene of the O.K. Corral. I hope to read it at some point in the future, as I’m looking forward to seeing how Russell concludes this story and the characters, and I’m interested in returning to the dust and drama of the Wild West.

Does this title interest you? Are you a fan of westerns?