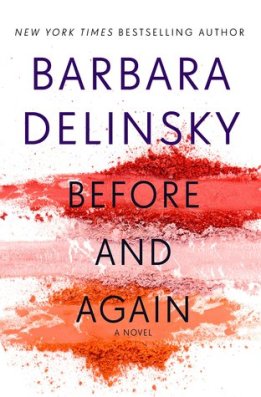 Official Synopsis from Goodreads: Mackenzie Cooper took her eyes off the road for just a moment but the resulting collision was enough to rob her not only of her beloved daughter but ultimately of her marriage, family, and friends―and thanks to the nonstop media coverage, even her privacy. Now she lives in Vermont under the name Maggie Reid, in a small house with her cats and dog. She’s thankful for the new friends she’s made―though she can’t risk telling them too much. And she takes satisfaction in working as a makeup artist at the luxurious local spa, helping clients hide the visible outward signs of their weariness, illnesses, and injuries. Covering up scars is a skill she has mastered.

Her only goal is to stay under the radar and make it through her remaining probation. But she isn’t the only one in this peaceful town with secrets. When a friend’s teenage son is thrust into the national spotlight, accused of hacking a powerful man’s Twitter account, Maggie is torn between pulling away and protecting herself―or stepping into the glare to be at their side. As the stunning truth behind their case is slowly revealed, Maggie’s own carefully constructed story begins to unravel as well. She knows all too well that what we need from each other in this difficult world is comfort. But to provide it, sometimes we need to travel far outside our comfort zones.

***I received an eARC copy of Before and Again from the publisher, St Martin’s Press, via NetGalley***

Review: Slow and long. Before and Again by Barbara Delinsky was a tough read for me. Telling the story of Maggie, who is dealing with the aftermath of losing her daughter in a car accident, and the subsequent breakdown of her marriage and family relations, Before and Again is an internal character study about grief and survival after loss.

The synopsis paints this story as a mystery of sorts, with the hacking and such, but there was little mystery or suspense here. So, for me, I went into this read thinking it would be more action packed and fast paced than it was, and it didn’t work for me. I found the chapters to be very long, so long in fact that as I would read on my lunch break I rarely came across a chapter end or break in the story. This made the story feel longer than it really was, and I think small breaks in the story would make a world of difference here.

Another thing that made the book feel longer was that it was full of unnecessary detail. For example in one scene, we are given several paragraphs of Maggie’s trip to the local yarn store. We learn what time she leaves for the store, how long it takes her to drive to the yarn store, what time the store closes, the cleanliness of the yarn store, and what kind of music is played in the store. This yarn store never appears again in the story that I could see, and this is one example of just too much detail about items that didn’t matter to the overall plot being focused on. Maybe those that enjoy elaborate settings and descriptions would appreciate this type of writing, but for me it was too much as I didn’t feel that it added anything.

The unnecessary descriptions also apply to the characters, too. Now describing in detail the main characters I understand. We need to know about them! They are important! But, I don’t need to know every detail about every person that appears in the book. This made me as a reader not able to decipher those characters that were important and which were just “there”, until the major players became apparent.

The major players I actually quite enjoyed. I could understand Maggie’s grief and her decisions; I felt for her and her struggle. Her ex-husband, Ned, comes to town, and I really liked him and their relationship. I could get behind them as a couple and really wanted them to be able to work through their problems. Maggie’s got a few friends in town, and they were nice and good supporting characters. The Twitter hacking plotline felt out of place and actually wasn’t as much of a focus for the book as I was expecting going in.

I do have to say that this was my first Barbara Delinsky book, and I know she’s a popular author, so I don’t know if this style of too much detail and slow pace is her usual, or if this is different than her other books. At this point, I’m unsure if I’d read her again, just because this one was so slow, almost painfully so at times. And that’s really a bummer, because the overall themes of grief, survival, love, and family were quite lovely, and this book had a romance that I actually really enjoyed. I just wish it had been edited down some to make for a quicker read.

Have you read any Barbara Delinsky books? Does this one sound similar to her other titles or does it sound different? Should I give her another chance?

3 thoughts on “ARC Review: Before and Again by Barbara Delinsky”