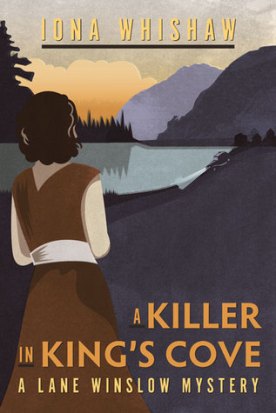 Official Synopsis from Goodreads: A smart and enchanting postwar mystery written for fans of the Maisie Dobbs series by Jacqueline Winspear.

It is 1946, and war-weary young ex-intelligence officer Lane Winslow leaves London to look for a fresh start. When she finds herself happily settled into a sleepy hamlet nestled in the idyllic interior of British Columbia surrounded by a suitably eclectic cast of small-town characters she feels like she may finally be able to put her past to rest.

But then a body is discovered, the victim of murder, and although she works alongside the town’s inspectors Darling and Ames to discover who might have possibly have motivation to kill, she unknowingly casts doubt on herself. As the investigation reveals facts that she has desperately tried to keep a secret, it threatens to pull her into a vortex of even greater losses than the ones she has already endured.

A clever postwar mystery that will appeal to fan of historical mysteries with women sleuths like the Maisie Dobbs series by Jacqueline Winspear or the Bess Crawford series by Charles Todd.

Genre: Historical Mystery
Setting: King’s Cove, British Columbia (near Nelson), 1946. With some flashbacks to France during WWI and WWII and London during WWII.

***I received a copy of A Killer in King’s Cove from the publisher, TouchWood Editions ***

Review: What a fun start to a delightful sounding series! I thoroughly enjoyed this book! A Killer in King’s Cove is the first book in the Lane Winslow series, which takes place in British Columbia right after WWII, in 1946. Our main character, Lane Winslow, is around age twenty-six, and had a mysterious job during the war in England, and has moved out to British Columbia, which is where our book begins.

I loved the setting of this novel. From the beautiful descriptions of King’s Cove, to the postwar time period, I just loved it. King’s Cove is a small village, and small villages, especially those in murder mysteries, are always full of unique and quirky characters. And King’s Cove definitely had those! From the lovely Italian-American Bertolli family, the sweet Armstrong’s who run the local post office, to Mrs Mather, who roams about the countryside with a rifle while shooting at cougars, I just really enjoyed the characters. They had a sense of camaraderie about them, and King’s Cove just really felt like a real location that would be enjoyable to live in. King’s Cove did have its share of unsavory characters as well, which brought a serious tone to parts of the story, but I found the characters well written and interesting, especially our main character, Lane Winslow.

She had decided, on the basis of a poster, to come out to British Columbia. It showed a woman standing on a hill with fields and snow-covered mountains behind her and a great, endless blue sky. A new, clean, uncomplicated country with no blood in the soil from centuries of wars. It was ironic that the first thing to confront her was a corpse, bleeding into her water supply. She shuddered. All right, he hadn’t been bleeding, but metaphorically, his life had bled away.

Lane aspires to be a writer, and the mystery of what she did during the war is a compelling plotline, and one that doesn’t resolve itself after the first book. I’m interested to see where the author, Iona Whishaw, takes Lane’s history and how she weaves that into future books.

My favorite parts of A Killer in King’s Cove had to do with Inspector Darling and his sidekick, Constable Ames. I just absolutely loved both of these characters, and especially loved their interactions with each other, and their interactions with Lane. It is rare for me to love a male lead in a mystery so much; I usually find them too bland and cardboard-like, but Inspector Darling just had an air of mystery, dry humor, and intelligence about him that I gravitated toward. And Ames was just so cheerful, exuberant, and kind, that the two played well off each other and had some really fun interactions. Throw in Lane’s witty intelligence, and you’ve got some excellent scenes that were really a lot of fun. I can’t wait to see what adventures these three get into next!

Darling inspected the ground. “Looking for something, sir?” inquired Ames.

“Yes, Ames. I’m a detective. I am looking for something. You might emulate me in this, if you don’t mind.”

The mystery aspect was pretty good, if a tad bit predictable, with a focus on the war, and the synopsis above mentions comparisons to Jacqueline Winspear’s Maisie Dobbs series and also the Bess Crawford books by Charles Todd. I can’t speak to the Charles Todd comparison, as I have not read any of those books yet, but this is absolutely a great series for those who enjoy Maisie Dobbs. There are similarities here between the books, as they both have a focus on war, and the psychological aftermath, and they also sleuth in a similar fashion. I will say that A Killer in King’s Cove is more lighthearted and fun than the Maisie Dobbs series is, and Lane isn’t as pompous as Maisie can be.

I enjoyed A Killer in King’s Cove so much, that I’m off to read book two of the series, Death in A Darkening Mist. Reading two books by the same author back-to-back is something I very rarely ever do, so this is high praise indeed! 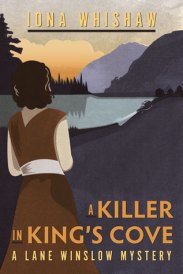 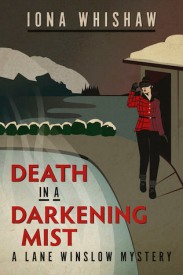 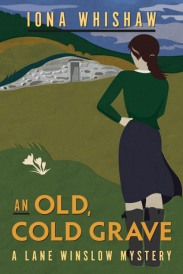 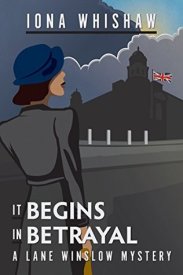