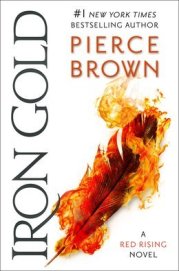 Official Synopsis from Goodreads: They call him father, liberator, warlord, Reaper. But he feels a boy as he falls toward the pale blue planet, his armor red, his army vast, his heart heavy. It is the tenth year of war and the thirty-second of his life.

A decade ago, Darrow was the hero of the revolution he believed would break the chains of the Society. But the Rising has shattered everything: Instead of peace and freedom, it has brought endless war. Now he must risk everything he has fought for on one last desperate mission. Darrow still believes he can save everyone, but can he save himself?

And throughout the worlds, other destinies entwine with Darrow’s to change his fate forever:

A young Red girl flees tragedy in her refugee camp and achieves for herself a new life she could never have imagined.

An ex-soldier broken by grief is forced to steal the most valuable thing in the galaxy—or pay with his life.

And Lysander au Lune, the heir in exile to the sovereign, wanders the stars with his mentor, Cassius, haunted by the loss of the world that Darrow transformed, and dreaming of what will rise from its ashes.

Red Rising was the story of the end of one universe, and Iron Gold is the story of the creation of a new one. Witness the beginning of a stunning new saga of tragedy and triumph from masterly New York Times bestselling author Pierce Brown.

Genre: Science Fiction, Dystopian Fiction
Setting: Space
My Copy Came From: I purchased the hardcover from my local bookstore, Copperfield’s.

And warning! Spoilers abound for the original Red Rising trilogy. There are no spoilers for Iron Gold.

Review: An excellent ending to a book that felt like it was mostly setup for future books in the series.

Two hundred million have died since House Lune fell. Tell me, what is the purpose of victory if it destroys us? If we are stretched so thin that we cannot protect or provide for those we bring out of the mines?

Told with four different POVs, we again see into the mind of Darrow, who is just as compelling and divisive a character as he was in the original Red Rising trilogy. Now married to Mustang, who is the leader of the government (I know she had a technical title but I just can’t remember it nor did I write it down), Darrow is once again trying to play by his own rules and causes disruptions.

A new POV character is Lyria, age eighteen, who is a Red from Mars. I never connected with Lyria. She was too annoyingly forced into a lot of the action here. I felt like she was only in certain scenes because the author was forcing her to be there rather than it feeling organic to the plot. She seems like someone who would be killed in a heartbeat, but yet, she just keeps surviving, and many of her scenes felt unrealistic to me, so I wonder if there is more to her than meets the eye. I dunno. I just felt removed from her character and she felt pointless to me.

I know it may be impossible to believe now, when everything is dark and broken, but you will survive this pain, little one. Pain is a memory. You will live and you will struggle and you will find joy. And you will remember your family from this breath to your dying days, because love does not fade. Love is the stars, and its light carries on long after death.

Another new POV character is Ephraim, age forty-six, and you may recall his name from the earlier trilogy as he was the fiancé of Trigg, Holiday’s brother who was killed. Ephraim’s a skilled thief, struggling with Trigg’s death, and his story took awhile for me to connect with, but I ended up really liking him. He was a character who intrigued me, and had layers to his personality and story, and he ended up being one of my favorite things about Iron Gold.

Besides Darrow, Lyria, and Ephraim, we are also treated to the POV of Lysander au Lune, who is now twenty years old and in hiding with Cassius. Lysander’s POV was the one I was most looking forward to, and I liked him, as he seems to bring forward the more cerebral, politically-minded action that we’re used to seeing from Mustang. While I liked Lysander, I didn’t end up loving his POV chapters as much as I was expecting to. I’m not sure why this is. Was it too much build up? Too much hype? Or was it just because every plot line with him just felt like set up for future books? It may be a bit of both.

There’s nothing more I can do here. This isn’t my world. I knew it before, and Dancer just reminded me. The man says all I know is war. And he is right. In my heart, I know my enemy. I know his mettle. I know his cruelty. And I know this war will not end with politicians smiling at each other from across a table.

It will only end as it began: with blood.

As in the original trilogy, I loved Sevro, Victra, and Cassius, and I was disappointed that they didn’t factor into this book as much. I wanted more page time for all of these characters, Victra especially. Mustang is also not as prominent in this book, but as she has never been a favorite of mine, I was okay with her absence. I get that Pierce Brown needs to build up his new characters, but I did really miss my favorites and hope that this is remedied in future books!

While fans of the Red Rising trilogy will enjoy the return to the world and characters, Iron Gold felt like a lot of setup for future books, and I didn’t feel any excitement or connection to it until the end of the book, which is too bad considering my copy was 596 pages long. I am hoping that this just means that the next book(s) will be nonstop craziness and the buildup will pay off. We’ll see!

Bottom Line: Lots of build up and doesn’t fully click until the end.