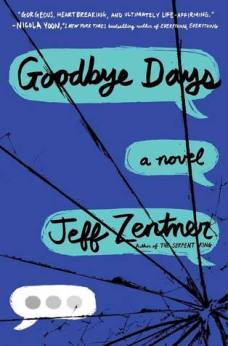 Official Synopsis from Goodreads: What if you could spend one last day with someone you lost?

One day Carver Briggs had it all—three best friends, a supportive family, and a reputation as a talented writer at his high school, Nashville Academy for the Arts.

The next day he lost it all when he sent a simple text to his friend Mars, right before Mars, Eli, and Blake were killed in a car crash.

Now Carver can’t stop blaming himself for the accident, and he’s not the only one. Eli’s twin sister is trying to freeze him out of school with her death-ray stare. And Mars’s father, a powerful judge, is pressuring the district attorney to open a criminal investigation into Carver’s actions.

Luckily, Carver has some unexpected allies: Eli’s girlfriend, the only person to stand by him at school; Dr. Mendez, his new therapist; and Blake’s grandmother, who asks Carver to spend a Goodbye Day with her to share their memories and say a proper goodbye to his friend.

Soon the other families are asking for a Goodbye Day with Carver, but he’s unsure of their motives. Will they all be able to make peace with their losses, or will these Goodbye Days bring Carver one step closer to a complete breakdown or—even worse—prison?

Review: Emotional and draining, but not as much as I expected. Goodbye Days by Jeff Zentner was a tough read about grief. Told in first person, we are in the thoughts of Carver Briggs, who was texting his friend Mars while Mars was driving, and Mars is killed in a car crash, along with Carver’s other friends, Blake and Eli. Goodbye Days shows Carver working through his guilt and his grief, and so this was a heavy read due to the subject matter.

I don’t say anything more on the short drive home. Instead, I reflect on frailty. Mine. Life’s.

I want to live unburdened again.

Although this was a draining book, with heavy subject matter, I felt a bit removed from the characters, so I didn’t have a tremendously emotional reaction to the sad scenes. Some scenes I did feel a connection with, mainly those where Carver is bullied at school about the deaths, but there was something holding me back from falling completely into this book.

Life everywhere. Pulsing, humming. A great wheel turning. A light blinks out here, one replaces it there. Always dying. Always living. We survive until we don’t.

All of this ending and beginning is the only thing that’s infinite.

As Carver works through this grief, he thinks back to good times with his friends, the “Sauce Crew”, and while these scenes showed the guys all having fun, I wanted to skip over these sections when they appeared. There was way too much “teen boy speak” for me, and I know, it’s a book narrated by a teen boy, so the language and focus in these scenes totally fits, but it just felt a bit young for me and I wasn’t interested in reading it. Also, some of the slang used just felt a bit… off and forced. It didn’t have the authentic teen-speak feel of say, The Hate U Give. But I’m not a teen, so really, what do I know. Since the genre is Young Adult, I’m not the target audience for this anyways, so my thoughts may be completely off here. But, for whatever reason, the scenes where it was the teenagers talking amongst themselves didn’t ring authentic to me.

In terms of characters, Jeff Zentner fleshes out the Sauce Crew, and also a girl named Jesmyn, who was dating Eli at the time of the crash. Jesmyn and Carver draw close to each other, as they each work through their grief. My favorite character was Nana Betsy, Blake’s grandmother. Nana Betsy and Blake have a close relationship, and I really liked their story and felt the most emotional connection to them. I also actually liked Mars’s father, Judge Frederick Edwards, who debates bringing a case against Carver for the death of his son. I wish that he and Mars had a bit more focus in the book, as I found their relationship interesting and wished for more of their story when the book was finished.

My emotions roil. In some ways, this day has sharpened everything I’ve felt over the past weeks. The guilt. The grief. The fear. It’s honed them to a razor, singing edge. But in other ways, it’s removed that edge slightly and replaced it with a dull sense of absence. While the grief feels like a more active emotion—a process of negotiation—the absence resembles grief with a measure of acceptance. If grief is a pounding surf, the absence is a melancholy, gently tossing sea.

Goodbye Days is not a happy book. Be aware when going into the read that it deals heavily with grief and loss. Parts of it were emotional for me, but I was expecting for this book to gut me, and it didn’t. I don’t know if it was because of the lack of connection with the characters, or if it was my mood when reading it, or what exactly it was.

Bottom Line: A heavy read that I didn’t quite connect with.

Amazon
Goodreads
Author’s Website
Link to my review of The Serpent King , another book by Jeff Zentner

Have you read Goodbye Days? Did you connect with the novel? What about The Serpent King?