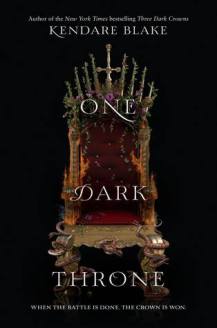 Official Synopsis from Goodreads: The battle for the Crown has begun, but which of the three sisters will prevail?

With the unforgettable events of the Quickening behind them and the Ascension Year underway, all bets are off. Katharine, once the weak and feeble sister, is stronger than ever before. Arsinoe, after discovering the truth about her powers, must figure out how to make her secret talent work in her favor without anyone finding out. And Mirabella, once thought to be the strongest sister of all and the certain Queen Crowned, faces attacks like never before—ones that put those around her in danger she can’t seem to prevent.

In this enthralling sequel to Kendare Blake’s New York Times bestselling Three Dark Crowns, Fennbirn’s deadliest queens must face the one thing standing in their way of the crown: each other.

Genre: Young Adult, Fantasy
My Copy Came From: I borrowed One Dark Throne from my local library.

Meh. Which is a shame! I really wanted to love this book, as the premise of this series is different enough to be intriguing, but there is a distinct lack of world building in this series. Or perhaps I should say that the world is built, but as a reader I’m not grasping what exactly the world is all about. About halfway through this entry I found myself begging for some descriptive paragraphs detailing the world, and the beliefs, and the terminology used. I don’t know why the queens are fighting – is it just to be the last standing? No one has ever dared to dispute this fight to the death between sisters before? I feel like I don’t know what anything is or why it matters. The character of Katherine has changed drastically from book one, now she is so bloodthirsty, she was almost painful to read. I really wasn’t a fan of this entry in the series, which is too bad. I’ll definitely be reading the next book, as I’m invested in the story and characters enough to want to continue on, but I was disappointed in this entry.

Link to my review of Three Dark Crowns (Book One)

I wrote this spotlight instead of a full review due to my blog still being on somewhat of a hiatus right now. I’m back, looking at reviews and commenting on other posts, but due to unforeseen circumstances, I am unable to write full reviews at this time. I hope to be back to writing full reviews shortly!

Are you a fan of this series? Which sister is your favorite? What are you hoping happens in book three?