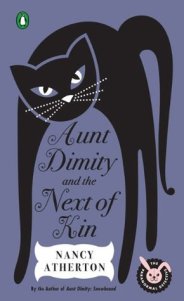 Official Synopsis from Goodreads: Hidden among her belongings are clues that Lori feels certain Miss Beacham wished to be discovered after her death.
Feeling a touch world-weary, Lori Shepherd decides to become a volunteer at the Radcliffe Infirmary, where she meets Elizabeth Beacham, a kind, retired legal secretary. But after only one visit, Miss Beacham passes away, leaving behind no family except a brother who has mysteriously disappeared. Armed with the generous help of a handsome neighbor and, as always, Aunt Dimity’s supernatural skills, Lori begins to unearth Miss Beacham’s secrets–including the surprising truth about her next of kin. Full of delightfully surprising twists and turns, Aunt Dimity and the Next of Kin is another page-turning installment in the mystery series that has won the hearts of cozy mystery fans everywhere.

Genre: Cozy mystery
Setting: Modern day Finch (a small village “in the west midlands of England”) and Oxford
My copy came from: Borrowed from my mom.

Review: Sweet and sad. Fans of the Aunt Dimity series will love this one!

Aunt Dimity and the Next of Kin is the tenth book in the Aunt Dimity Mystery series, a series that combines whimsy, magic, a bit of mystery, and a picturesque setting into a sweet mystery series. If you enjoy mysteries (not necessarily just murder mysteries – there is no murder in this particular book), and don’t mind a super-sweet story and a sometimes obnoxiously perfect heroine, then this series is for you! I go back and forth with this series, as the main character, Lori Shepherd, is sometimes way too much for me to handle. She’s perfectly beautiful (everyone falls in love with her), she’s fabulously rich (she’s rich and her perfect husband is rich as well), and she lives in a perfect house in the English countryside. Sometimes she just really bugs me, but other times I can set aside my petty jealousy (of a fictional character!!) and enjoy the books. I’m happy to report that in this installment, Lori wasn’t obnoxious at all, and I enjoyed the mystery and the setting.

This mystery is about Lori meeting a nice older lady, Miss Beacham, who passes away and Lori is tasked with finding Miss Beacham’s brother (her Next of Kin… get it?). Lori’s search takes her to Oxford, where Miss Beacham lived, and I liked the mystery in this book. Sometimes you just need to read something light-hearted and kind, and Aunt Dimity Mysteries will always fill that requirement! Aunt Dimity and the Next of Kin is definitely one of the better Aunt Dimity books. One that is both sweet and sad.

Oh, and if you haven’t ever read an Aunt Dimity book before, definitely read book one first, Aunt Dimity’s Death. It explains the origins and magic of Aunt Dimity.

Bottom Line: Sweet and sad. An excellent addition to the Aunt Dimity series.

Have you read any of the Aunt Dimity Mysteries? Which one is your favorite? My favorite is book #2, Aunt Dimity and the Duke.

14 thoughts on “Book Review: Aunt Dimity and the Next of Kin by Nancy Atherton (An Aunt Dimity Mystery #10)”