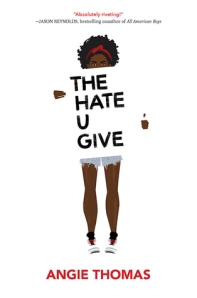 Official Synopsis from Goodreads: Sixteen-year-old Starr Carter moves between two worlds: the poor neighborhood where she lives and the fancy suburban prep school she attends. The uneasy balance between these worlds is shattered when Starr witnesses the fatal shooting of her childhood best friend Khalil at the hands of a police officer. Khalil was unarmed.

Soon afterward, his death is a national headline. Some are calling him a thug, maybe even a drug dealer and a gangbanger. Protesters are taking to the streets in Khalil’s name. Some cops and the local drug lord try to intimidate Starr and her family. What everyone wants to know is: what really went down that night? And the only person alive who can answer that is Starr.

But what Starr does or does not say could upend her community. It could also endanger her life.

Genre: Young Adult (but this is a book that everyone should read), Contemporary Fiction
Setting: Modern day Garden Heights and Riverton Hills (I could never figure out if these were real places, or a fictional setting within the novel. The setting feels very real.)
My copy came from: I borrowed a copy from my local library.

Review: Stunning, powerful, and shines a light on an issue that needs to be discussed. The Hate U Give is a book that everyone is raving about. I don’t think I’ve seen a bad review of this book. The Hate U Give is a fairly new release, it came out in February, and it has massively high ratings on both Amazon and Goodreads. The book is told in first-person, narrated by sixteen-year-old Starr Carter, who witnesses her friend get killed by a cop. This is a timely issue, one that seems to be happening far too often.

An earsplitting scream emerges from my gut, explodes in my throat, and uses every inch of me to be heard.

I went into this book thinking that it would be a powerful read, and it most certainly was, but the book is also a wonderful story of family and love. In YA books, many times the family dynamic is either missing entirely, or the parents are portrayed as ridiculous and out-of-touch, and the children show zero respect or love for their parents and/or siblings. I can happily say that The Hate U Give has an extremely strong family core. Starr lives with her parents, Maverick and Lisa, as well as her older half-brother, Seven, and her younger brother, Sekani. Her parents are obviously in love with each other, and obviously care about their children. They want to know what is happening in their kids’ lives, they talk to their kids; they discipline and teach their kids. The kids love and respect their parents, looking up to them for guidance. The siblings love each other, but also get exasperated with each other, and I thought young Sekani’s antics were hilarious and typical of a younger brother. It was so refreshing to read what felt like a real family dynamic. In other YA books, the only other family dynamics that I’ve read that come close to what this felt like are the Weasley family from Harry Potter, and perhaps Lydia’s family from The Serpent King. 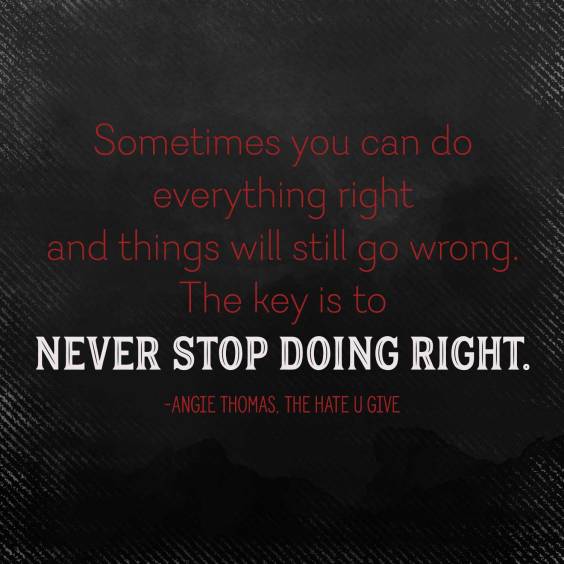 In terms of characters, I loved Starr, the main character who narrates the novel. Her voice felt real as she struggles with life in Garden Heights and her private schooling in the rich community of Riverton Hills, and dealing with the aftermath of being a witness to her friend’s killing. Other characters I loved were Big Mav, Starr’s father, who is an ex-con and runs the local grocery store, and Lisa, Starr’s mother, a nurse who drives her kids to school 45 minutes away so they can get a good education. I also loved Seven, Starr’s older brother, and Uncle Carlos, Starr’s uncle who happens to be a detective, and knows the cop who killed Starr’s friend, and so that brings another dynamic into the whole situation.

I can’t believe I let Hailey say that. Or has she always joked like that? Did I always laugh because I thought I had to?
That’s the problem. We let people say stuff, and they say it so much that it becomes okay to them and normal for us. What’s the point of having a voice if you’re gonna be silent in those moments you shouldn’t be?

The only negative thing I can say about the book, and this is just personal preference, but there was a lot of swearing in the book. Like a LOT! Starr and the people around her swear quite a bit (it was super cute to have Starr’s younger brother be on the lookout for people swearing so he could get a dollar in the swear jar), but the swearing was a bit much for me.

Bottom Line: Stunning and powerful with a good message and great characters. A must read.

Links to The Hate U Give on  Amazon |   Goodreads

Have you read The Hate U Give? Are you in love with Starr’s family? Which character was your favorite?

21 thoughts on “Book Review: The Hate U Give by Angie Thomas”