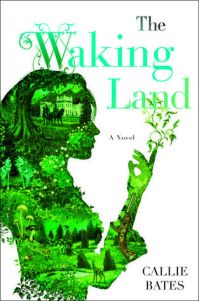 Official Synopsis from Goodreads: Lady Elanna Valtai is fiercely devoted to the King who raised her like a daughter. But when he dies under mysterious circumstances, Elanna is accused of his murder and must flee for her life.

Returning to the homeland of magical legends she has forsaken, Elanna is forced to reckon with her despised, estranged father, branded a traitor long ago. Feeling a strange, deep connection to the natural world, she also must face the truth about the forces she has always denied or disdained as superstition powers that suddenly stir within her.

But an all-too-human threat is drawing near, determined to exact vengeance. Now Elanna has no choice but to lead a rebellion against the kingdom to which she once gave her allegiance. Trapped between divided loyalties, she must summon the courage to confront a destiny that could tear her apart.

***I received an eARC copy of The Waking Land from the publisher, Del Ray, via NetGalley***

Review: Oof, I really had to force myself to finish this one! I found it slow and distant, but The Waking Land has an intriguing premise. The Waking Land by Callie Bates is a magical book that is told in first-person and focuses on Elanna Valtai, age nineteen, who was taken hostage as a young girl and forced to live away from her parents. The book starts out with the king being murdered, and Elanna being accused of that crime. Elanna has lived for years trying to hide her magical powers, and she escapes and meets up with various people who can help her learn her magic and help right the kingdom.

I’ll start out by saying that I found Elanna quite bland. She is magical, in that she can control nature, ie, grow trees and plants, and control rivers and rocks, and her magic was far more interesting than she was. There were many scenes where Elanna would be trapped somewhere and she’d be complaining about being trapped, but she had just done some wonderful magic, and I’d think, “Why aren’t you trying to use your surroundings to escape? You can control the ______ (trees, river, mountain, fog, etc)!” Perhaps I’m being too harsh on Elanna, but I never felt a true connection to her, or the other characters around her. It’s not that she was written badly, she did have gumption and bravery and intelligence, but I just could not connect to her or to her love interest, Jahan.

I think the world building of the novel was done well. There are various people and rivalries, languages and magics, stories and myths. This was interesting, but I felt removed from this story, and The Waking Land seemed to take me forever to finish. Sadly, I would’ve probably DNF’d this book had I not gotten an ARC of it. I feel really awful making that statement, as the author clearly put forth a lot of hard work on this book, but I just didn’t connect and found it slow and it felt exceedingly long. Amazon has the book listed at 400 pages, so it’s not too terribly long, but I just really felt that it dragged and I never felt compelled to read it.

I do think that some readers will really enjoy this book; unfortunately it just wasn’t for me. I think that those who like a more clean-cut fantasy (although there was one sex scene that seemed out of place and came out of nowhere) and those who enjoy books that focus on magic and nature may really love this. Sadly it just wasn’t in the cards for me this time! There isn’t any particular reason I felt this way about The Waking Land (ie, the main character wasn’t annoying, the writing was good, the setting was interesting), but I just felt removed from the entire book. Bummer.

Bottom Line: Not for me. I couldn’t connect to the story or the characters, and struggled to finish this one.

Links to The Waking Land on   Amazon |   Goodreads

25 thoughts on “ARC Review: The Waking Land by Callie Bates”