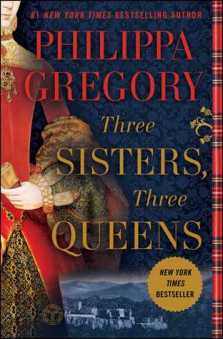 Official Synopsis from Goodreads: From #1 New York Times bestselling author Philippa Gregory, the little-known story of three Tudor women who are united in sisterhood and yet compelled to be rivals when they fulfill their destinies as queens.

As sisters they share an everlasting bond; as queens they can break each other’s hearts…

When Katherine of Aragon is brought to the Tudor court as a young bride, the oldest princess, Margaret, takes her measure. With one look, each knows the other for a rival, an ally, a pawn, destined—with Margaret’s younger sister Mary—to a unique sisterhood. The three sisters will become the queens of England, Scotland, and France.

United by family loyalties and affections, the three queens find themselves set against each other. Katherine commands an army against Margaret and kills her husband James IV of Scotland. But Margaret’s boy becomes heir to the Tudor throne when Katherine loses her son.

Mary steals the widowed Margaret’s proposed husband, but when Mary is widowed it is her secret marriage for love that is the envy of the others. As they experience betrayals, dangers, loss, and passion, the three sisters find that the only constant in their perilous lives is their special bond, more powerful than any man, even a king.

Genre: Historical Fiction
Setting: 1501-1533, England and Scotland
My copy came from: I purchased the paperback from my local bookstore, Copperfield’s Books.

Review: An intriguing read full of historical information, but the title and synopsis is a bit misleading, and the book was different than what I thought it would be.

The book starts out when Margaret is very young, and Katherine comes to England to marry Arthur, Henry’s older brother who was supposed to be king. Alas, he died shortly after he and Katherine were married, so we never got to see how he, a boy trained to be king from birth, would’ve handled the throne.

We are princesses, we were born to be queens, we are sisters.

Young Margaret is arrogant and prideful, with a quick temper. She is sent to Scotland to marry James, the King of Scotland, in order to keep the peace between England and Scotland. I was unaware of all of this history, and found these sections fascinating. I enjoyed reading about the womanizing James, and I really was invested in his and Margaret’s relationship. After James’s untimely death, Margaret marries again, with disastrous consequences, and it was fascinating to read about how Margaret was attempting to divorce her second husband, in a time when this was not permitted.

Throughout everything that happens in the plot of the book, the relationship between the three queens is told primarily through letters. Since Mary is in France, and then later in England with Katherine, while Margaret is in Scotland, we really don’t get to see the three queens interact much. There’s a brief section where the three are together, and that was interesting, but I must admit to confusion as to why the book’s focus was the three sisters, but to have the book be told only through Margaret’s eyes. Katherine’s story is absolutely fascinating, and I’m again struck here with respect and admiration for her after everything she went through. Mary’s story is one I’ve always liked, especially the relationship between Mary and Charles Brandon, so was glad to see that be a part of this book. But I was also disappointed in that we really only got to see that relationship through letters.

When Margaret is not reading or writing letters to her sisters, she’s scheming ways to have control over the King of Scotland, and she’s trying to also keep a handle on her brother, King Henry VIII, and trying to keep peace between Scotland and England. Sometimes Margaret felt real and interesting, but other times she was far too whiny, arrogant, and jealous. It seemed like many times all she was doing was sitting there thinking jealous thoughts toward Katherine and Mary. It was extremely tiresome and repetitive. So, editing down was needed in these sections as I felt it was pages and pages of petty thoughts and sisterly competition, and I was reminded how cruel women can be to each other.

There is only one bond that I trust and that is between a woman and her sisters. Only the three of us are indissoluble. We never take our eyes off each other. In love and rivalry, we always think of each other.

Even though Margaret has quite a lot going on in Scotland, the way the story was told felt like Margaret was off in far-away Scotland brooding to herself, while her sisters went along with their life and didn’t think of her at all. So, I really would’ve liked to see POV chapters from Katherine and Mary in this book. I think that would’ve made it a standout entry in the Plantagenet and Tudor Novels series. The point of the sisters relationship/drama/friendship/rivalry was well done, almost hammered home a bit too hard, but I really wish we would’ve either had a total focus on Margaret, or brought other POVs into the picture.

All in all, some parts of Three Sisters, Three Queens flew by. Others dragged. It isn’t my favorite of Gregory’s novels, but it isn’t my least favorite either. Every time I pick up a Philippa Gregory book I get the urge to re-read all of her books. This one especially made me want to re-read The Constant Princess (which focuses on Katherine of Aragon), and also The Other Queen (which focuses on Mary, Queen of Scots, who happens to be Margaret’s granddaughter). And oddly enough, those are the Gregory books that I have enjoyed the least.

Bottom Line: Intriguing history and characters, but the way the story was told was not what I was expecting.

Philippa Gregory’s The Plantagenet and Tudor Novels: (These can be read out of order. *starred books are ones I particularly enjoyed)

Which is your favorite Philippa Gregory novel? Have you read other authors who focus on this time period?