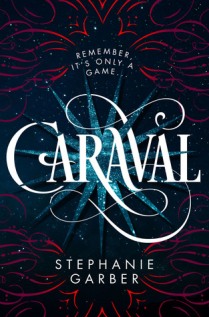 Official Synopsis from Goodreads: Remember, it’s only a game…

Scarlett Dragna has never left the tiny island where she and her sister, Tella, live with their powerful, and cruel, father. Now Scarlett’s father has arranged a marriage for her, and Scarlett thinks her dreams of seeing Caraval—the faraway, once-a-year performance where the audience participates in the show—are over.

But this year, Scarlett’s long-dreamt-of invitation finally arrives. With the help of a mysterious sailor, Tella whisks Scarlett away to the show. Only, as soon as they arrive, Tella is kidnapped by Caraval’s mastermind organizer, Legend. It turns out that this season’s Caraval revolves around Tella, and whoever finds her first is the winner.

Scarlett has been told that everything that happens during Caraval is only an elaborate performance. Nevertheless she becomes enmeshed in a game of love, heartbreak, and magic. And whether Caraval is real or not, Scarlett must find Tella before the five nights of the game are over or a dangerous domino effect of consequences will be set off, and her beloved sister will disappear forever.

Welcome, welcome to Caraval…beware of getting swept too far away.

Genre: Fantasy, Young Adult
My copy came from: I borrowed Caraval from my local library.

Review: Dark and atmospheric, but it didn’t live up to the hype for me. I enjoyed it, it kept my interest, but I never became fully immersed in the story. Caraval is one of those books that many are talking about, and it seems that I see a review or two of this book almost every day on my WordPress feed. So I went into this book hoping that it would blow me away, but realistically I knew it probably wouldn’t. And it didn’t blow me away. I enjoyed the atmosphere of it, but had trouble connecting to the main character, Scarlett (or “Crimson” as one character likes to call her), and felt removed from the story throughout almost the entire book. I say almost because I did enjoy the ending, and read the book quickly.

The story of Caraval is one that involves a magical game, in which the winner receives a wish. The creator of the game, named Legend, is a mystery, and is still a mystery to me after completing this book. I confess that he didn’t have much appeal to me, so I wasn’t ever feeling the drama and tension that our main character, Scarlett, felt towards Legend.

Dreams that come true can be beautiful, but they can also turn into nightmares when people won’t wake up.

Scarlett and her sister, Donatella (“Tella”), end up invited to play Caraval, and a man, Julian, goes with them. I had difficulty with the names of Scarlett and Tella. I kept confusing their names together as I was reading, and their characters are not all that different, so I had to keep re-reading sections that they both appeared in. Once Tella was kidnapped, the book became easier to follow, and I didn’t have difficulty with the names.

The main character, Scarlett, was all right I guess. She was annoying at the beginning of the book, as she was too impulsive for me, but I appreciated her impulsiveness at times once I got into the mystery of the game. Another main character is Julian, the above-mentioned mystery sailor who accompanies Scarlett in the game. I wasn’t too sold on Julian; I actually preferred the mystery of Dante (another mystery man in the game), but he was interesting in that who-is-this-guy and what-are-his-motives way. 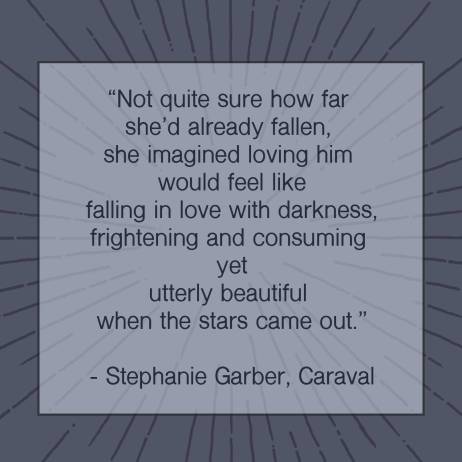 One issue readers may have with this book is the flowery writing. Scarlett is very descriptive about the world around her, and some of the statements made me roll my eyes. There are many, many examples of this throughout the book, but here are three examples so you can see what I’m talking about:

There are many lines like this that some people may really love. I found them too flowery and odd and just wanted the author to get on with the story.

There are twists and turns in this book, and one of the things that I liked most about it was its unpredictability. When I thought something would happen one way, it twisted in a different way, and I enjoyed the twists and turns. There were a few things that happened that no way did I see coming!

But, while it had unpredictability, I wasn’t fully transported into the world of Caraval. I was still completely aware that I was reading a book, and never got that immersive quality that I yearn for when reading fantasy.   Many have compared this book to The Night Circus, and while Caraval is darker than The Night Circus, I much prefer The Night Circus. That book transported me and made me care about its characters, and I didn’t have that feeling here.

Do you always focus on what you’re giving up, rather than what you’ll be gaining? Some things are worth pursuit regardless of the cost.

I will definitely read book two when it is released, as the story ends on just enough of a cliffhanger to not be entirely frustrating, and perfectly sets up book two.

Links to Caraval on   Amazon |   Goodreads

Links to The Night Circus on   Amazon   |   Goodreads

Have you fallen under the spell of Caraval? Do you have a favorite between The Night Circus and Caraval? Will you be reading book two when it is released?