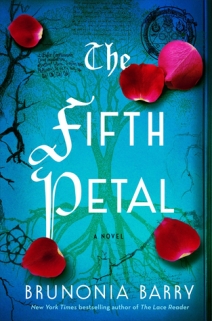 Official Synopsis from Goodreads: Salem’s chief of police, John Rafferty, now married to gifted lace reader Towner Whitney, investigates a 25-year-old triple homicide dubbed “The Goddess Murders,” in which three young women, all descended from accused Salem witches, were slashed one Halloween night. Aided by Callie Cahill, the daughter of one of the victims who has returned to town, Rafferty begins to uncover a dark chapter in Salem’s past. Callie, who has always been gifted with premonitions, begins to struggle with visions she doesn’t quite understand and an attraction to a man who has unknown connections to her mother’s murder. Neither believes that the main suspect, Rose Whelan, respected local historian and sometime-aunt to Callie, is guilty of murder or witchcraft. But exonerating Rose might mean crossing paths with a dangerous force. Were the women victims of an all-too-human vengeance, or was the devil raised in Salem that night? And if they cannot discover what truly happened, will evil rise again?

*** I received an eARC copy from Crown Publishing via NetGalley in exchange for an honest review. ***

Review: Interesting premise and setting, but The Fifth Petal failed to capture my attention.

The Fifth Petal by Brunonia Barry is set in the same environment as Barry’s previous book, The Lace Reader. The Lace Reader was one of my book club reads, and that was a mysterious tale with a crazy twist ending that I never saw coming! So I was interested to read The Fifth Petal and see if Barry would bring something unexpected to the table again. Sadly, I didn’t particularly care for The Fifth Petal. There was nothing really wrong with it, the writing was wonderful, the characters well drawn, but I never really thought about the book when I wasn’t reading it, and I just didn’t care a lot about the mystery.

Told mainly from the perspective of Rafferty, the chief of police in Salem, and Callie, the survivor of a cold case where three women were killed, Rafferty and Callie are likable and interesting. Rafferty, who was also in The Lace Reader, is trying to solve a current murder with possible ties to the unsolved “Goddess Murders” from 1989, and Callie is a survivor of that cold case. She was five when the murders happened, and the one suspect, Rose, is a suspect in another recent case. Callie returns to Salem after Rafferty contacts her about Rose.

The paranormal figures a lot in this book. Rose, who was never convicted of “The Goddess Murders”, has always stated that a banshee killed the girls. Since the setting is Salem, there is a lot of information about the Salem Witch Trials from 1692, and information about witchcraft and banshees. This was interesting, and thankfully, wasn’t scary for me at all. I hadn’t realized banshees were a part of this book, and banshees have always terrified me. (Thank you Darby O’Gill and the Little People.) Hopefully I can now put the banshee in my past behind me, and move on to other fears!

One absolutely fascinating focus of this book is sound healing. Callie is a music therapist and also practices sound healing (or sound therapy), in which crystal bowls are used to create vibrations and sounds in various pitches and notes that can attack your pain and illness and help heal. Callie uses her crystal bowls to help those suffering from various things, and hearing all about this type of healing was the most interesting part of the book for me.

The ending of this book was confusing to me, and I had trouble picturing what was happening in my mind. I think this is just because sometimes I have trouble following action scenes in books; it almost moves too fast for me to be able to picture.

Even though this one wasn’t the most exciting book, it was still well written and well researched, and those with an interest in Salem’s history or witches in general I think will really enjoy this book. There was really no particular reason I didn’t love it; I just didn’t really connect to the mystery or the story.

Bottom Line: Well written mystery, but I didn’t connect to it. Those with an interest in the paranormal may really love this book.

Links to The Fifth Petal on   Amazon   and   Goodreads

Links to The Lace Reader on  Amazon   and   Goodreads

Does this sound like an interesting read? Have you read The Lace Reader? Have you seen Darby O’Gill and the Little People? (It stars a young Sean Connery!)

10 thoughts on “ARC Review: The Fifth Petal by Brunonia Barry”