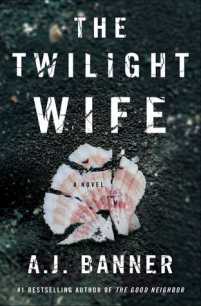 Official Synopsis from Goodreads: From bestselling author A.J. Banner comes a dazzling new novel of psychological suspense in the vein of S.J. Watson’s Before I Go to Sleep and Mary Kubica’s The Good Girl that questions just how much we can trust the people around us.

Thirty-four-year-old marine biologist Kyra Winthrop remembers nothing about the diving accident that left her with a complex form of memory loss. With only brief flashes of the last few years of her life, her world has narrowed to a few close friendships on the island where she lives with her devoted husband, Jacob.

But all is not what it seems. Kyra begins to have visions—or are they memories?—of a rocky marriage, broken promises, and cryptic relationships with the island residents, whom she believes to be her friends.

As Kyra races to uncover her past, the truth becomes a terrifying nightmare. A twisty, immersive thriller, The Twilight Wife will keep readers enthralled through the final, shocking twist.

***I received an eARC of The Twilight Wife from Touchstone via NetGalley in exchange for an honest review.***

Review: I never saw that twist coming, and enjoyed the plot turns, but the book felt too short overall.

The Twilight Wife has a good start, Kyra Winthrop is recovering from a diving accident on the remote Mystic Island, which is part of the San Juan Islands located off the coast of Washington. I don’t think Mystic Island is a real place, at least I couldn’t find anything online about it being real or made up, but I admit to not looking very hard!

So Kyra is recovering, and has a kind husband, Jacob, who is helping her with her recovery. Kyra can’t remember about four years of her life, and has trouble remembering small details day to day. I was intrigued by this premise, and Kyra is an interesting main character. I liked her and wanted her to regain her memories and to figure out what is going on and whether or not her accident was intentional or truly accidental. So the mystery there is good.

But unfortunately, we have a lot of buildup, and by that I mean a LOT of the same scene replayed over and over again. Kyra goes for an early morning walk on the beach, Jacob makes her coffee, and then they have a conversation and also an argument. And repeat. And repeat. This was fine at the beginning, but then it began to get a little irritating. But as soon as I started to get really irritated and anxious for the book to go somewhere, the twist happens, and after that the book rockets off to its nonstop ending.

And while the ending was good, and I did enjoy it, it felt rushed and uneven. I would’ve liked an ending that felt like it had the same attention and focus on the characters that the build-up had. I wanted more from the last forty percent of the book. I think this could’ve been solved with maybe two or three additional chapters. And for those of us who have read the book, I know I can’t possibly be alone when I say that there is a major scene missing that I desperately wanted to read about. No spoilers here, but if you’ve read the book, you probably can guess what scene I would’ve loved to see.

All in all, this is a great, smart thriller with a surprise that I didn’t see coming, and I did enjoy it. This is one of those rare books where I think a few more chapters could’ve helped even things out for the narrative. The book felt a little short.

Bottom Line: Smart and thrilling with a twist. Enjoyable, but needed to be a bit longer. I rated The Twilight Wife three stars on Goodreads.

Links to The Twilight Wife on  Amazon  and   Goodreads

Does this sound like a fun thriller? Are you anxious to read it and figure out which scene I think is missing from the book?

11 thoughts on “ARC Review: The Twilight Wife by A.J. Banner”