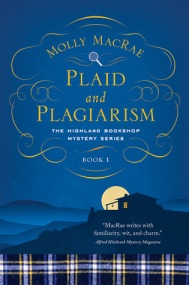 Official Synopsis from Amazon: A murder in a garden turns the four new owners of Yon Bonnie Books into amateur detectives, in a captivating new cozy mystery novel from Molly MacRae.

Set in the weeks before the annual Inversgail Literature Festival in Scotland, Plaid and Plagiarism begins on a morning shortly after the four women take possession of their bookshop in the Highlands. Unfortunately, the move to Inversgail hasn’t gone as smoothly as they’d planned.

First, Janet Marsh is told she’ll have to wait before moving into her new home. Then she finds out the house has been vandalized. Again. The chief suspect? Una Graham, an advice columnist for the local paper―who’s trying to make a name for herself as an investigative reporter. When Janet and her business partners go looking for clues at the house, they find a body―it’s Una, in the garden shed, with a sickle in her neck. Janet never did like that garden shed.

Who wanted Una dead? After discovering a cache of nasty letters, Janet and her friends are beginning to wonder who didn’t, including Janet’s ex-husband. Surrounded by a cast of characters with whom readers will fall in love, the new owners of Yon Bonnie Books set out to solve Una’s murder so they can get back to business.

A delightful and deadly new novel about recognizing one’s strengths and weakness―while also trying to open a new book shop―Plaid and Plagiarism is the start of an entertaining new Scottish mystery series.

*** I received an eARC copy of Plaid and Plagiarism by the publisher, Pegasus Books, via NetGalley, in exchange for an honest review ***

Review: Cute setting and mystery, but the main four ladies weren’t all that exciting or memorable on their own.

Plaid and Plagiarism is the first in a new cozy mystery series by Molly MacRae, called The Highland Bookshop Mystery Series. Set in the fictional town of Inversgail, located in the Scottish Highlands, the story focuses on four women who have moved to Inversgail from the US to take over the running of an established bookstore, Yon Bonnie Books. Besides the bookstore, the gals have plans to open up a tearoom next door, and also a B&B.

First off, the setting of the Scottish Highlands is enchanting, and the bookstore was a lot of fun. A lot of Scottish themed books are mentioned, and hearing the titles made me want to start reading them and also start baking scones.

Our four ladies with big dreams are Janet, Christine, Tallie, and Summer. Janet and Tallie (short for Natalie) are mother and daughter, with Janet just having gone through a painful divorce. Christine, a dear friend of Janet’s, is originally from Inversgail, and is our local link to the town. Summer is a good friend of Tallie’s and ready for something new. The plan is for Janet and Tallie to run the bookstore, and for Christine and Summer to run the tearoom and B&B.

Each woman has their own experience to bring to the table. One used to be a librarian, another a reporter, one a social worker, and another worked with corporate law. I appreciated this aspect of these characters, as they were all portrayed as smart, competent women. Tallie and Summer are both in their late 30s, and I don’t recall how old Janet and Christine are.

In terms of the murder mystery, the plot was good. There are many red herrings here, and I did not guess who the murderer was, which is always refreshing. I love books where there are many suspects, and Plaid and Plagiarism definitely has a lot! But not too many to make it confusing or over-the-top, which I appreciate.

Since this is book one of a new series, I definitely would read more books from this author and in this series. The setting was great fun, and made me want to move to Scotland and open a bookshop. There are also great secondary characters to make things a bit livelier, and the town and people of Inversgail should lend plenty of inspiration for future plots. I’m hoping that the four main ladies are given a bit more personality in future books.

Bottom Line: Solid setting and plot, just lacking in character development for our leads. I rated Plaid and Plagiarism three stars on Goodreads.

Links to Plaid and Plagiarism, which releases today, on Amazon and Goodreads

Link to Molly MacRae’s (the authors) Pinterest page here.   She has compiled a page of some of the books sold in Yon Bonnie Books. What fun that they are real books! I discovered this on my internet search to see if Inversgail was a real place (it’s not).

And here’s a link to my Pinterest page inspired by Plaid and Plagiarism  here.

Doesn’t this sound like a cute read? Have you ever been to Scotland? One day I hope to get there!