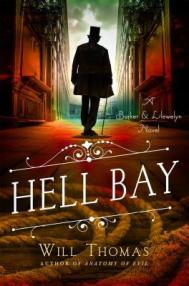 At the request of Her Majesty’s government, private enquiry agent Cyrus Barker agrees to take on his least favorite kind of assignment—he’s to provide security for a secret conference with the French government. The conference is to take place on the private estate of Lord Hargrave on a remote island off the coast of Cornwall. The goal of the conference is the negotiation of a new treaty with France. The cover story for the gathering is a house party—an attempt to introduce Lord Hargrave’s two unmarried sons to potential mates.

But shortly after the parties land at the island, Lord Hargrave is killed by a sniper shot, and the French ambassador’s head of security is found stabbed to death. The only means of egress from the island—a boat—has been sent away, and the means of signaling for help has been destroyed. Trapped in a manor house with no way of escape, Cyrus Barker and his assistant, Thomas Llewelyn, must uncover which among them is the killer before the next victim falls.

*** Thanks to St Martin’s Press and Minotaur Books via NetGalley who provided me an eARC in exchange for an honest review.***

Sadly, I did not love this entry in the Barker and Llewelyn series. I really wanted to love it, and it was enjoyable, but not in the way previous entries were.

Hell Bay by Will Thomas is the eighth book in the Barker and Llewelyn historical mystery series. Set sometime after the events of the previous book that takes on Jack the Ripper, Hell Bay changes up the typical Barker and Llewelyn setting of Victorian London, and takes us to a faraway, secluded island in the Isles of Scilly. Barker and Llewelyn are hired to be private security at a party that doubles as a cover-up for political conversations. When the host is murdered, Barker and Llewelyn must solve the crime to save everyone on the island.

I’m a big fan of Will Thomas’ Barker and Llewelyn series, have been for years, and have reviewed the previous two installments, Fatal Enquiry and Anatomy of Evil, and enjoyed them. This entry, Hell Bay, I’m sorry to say does not compare to previous books. The problem is that Barker and Llewelyn are, in this book, trapped on a faraway island, with no chance of escape, and thus many of the historical aspects that are enjoyable in past books are just not here.

I missed Barker and Llewelyn wandering the dirty streets of London, and interacting with the variety of characters there. In this book, since there is a house party going on, we do have some characters, but most of them are fairly bland in comparison to those we know and love from earlier entries in the series.

We do have a tiny bit of historical information in regards to the War of the Pacific, a war between Peru, Bolivia, and Chile, which I hadn’t heard of before reading this book, and I wanted more information. So, the historical detail that I have come to expect from a Barker and Llewelyn book was missing in Hell Bay.

That’s not to say I didn’t enjoy the book. I did enjoy it! The murder mystery aspect was well done, and I had my suspicions of whodunit early on, and here is another mystery where motive matters, and it surprised me.

In terms of this being a typical manor house mystery, with a “closed circle of suspects”, this was a good mystery, with twists and turns and multiple murders. It’s just that it is very different from previous Barker and Llewelyn books, due to the lack of historical detail, and that was my main issue with the book.

*** Thanks to St Martin’s Press and Minotaur Books via NetGalley who provided me an eARC in exchange for an honest review.***

Links to Hell Bay at Amazon   and Goodreads

Links to my reviews of   Fatal Enquiry   and   Anatomy of Evil