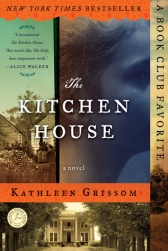 Official Synopsis from the back of the book: At the turn of the nineteenth century on a tobacco plantation in Virginia, young, white Lavinia, who was orphaned on her passage from Ireland, arrives on the steps of the kitchen house and is placed under the care of Belle, the master’s illegitimate, black daughter. Lavinia learns to cook, clean, serve food, and cherish the quiet strength and love of her new family.

In time, Lavinia is accepted into the world of the big house, caring for the master’s opium-addicted wife and befriending his dangerous yet protective son. She attempts to straddle the worlds of the kitchen and big house, but her skin color will forever set her apart from Belle and the other slaves.

Through the unique eyes of Lavinia and Belle, Kathleen Grissom’s debut novel unfolds in a heartbreaking and ultimately hopeful story of class, race, dignity, deep-buried secrets, and familial bonds.

Review: Powerful, but depressing, and hinges on too many unsaid things.

The Kitchen House by Kathleen Grissom takes us to pre-Civil War Virginia and focuses on two girls. Lavinia, age seven, who is Irish and an indentured servant, and Belle, who is eighteen, the illegitimate daughter of the plantation owner, and a slave. The Kitchen House tells Lavinia and Belle’s stories as they each grow up.

Our two main characters, Lavinia and Belle, are both interesting heroines. Belle has a bit more fire to her, while Lavinia just kind of goes along and doesn’t really think too much about what is going on around her. Since the story starts out with Lavinia being seven years old, much of what the reader sees and can understand takes Lavinia awhile to figure out (ie, slavery, abuse, etc). This was an interesting story to tell in that Lavinia is an indentured servant, and so she lives among the slaves, and comes to think of the slaves as her family. I can’t recall reading any other book that brings up indentured servants in this time period before.

Because The Kitchen House deals with slavery, it was an incredibly difficult book for me to read. Scenes of abuse and rape abound, and at one point, a character states, “I don’t see nothing but trouble coming every way I look”, and this was an accurate description of how I felt while reading the book. With the flip of every page, something terrible would happen, and I found myself struggling to read this.

While the subject matter is very difficult to read about, the characters were interesting and made me care about their story. The characters I liked the best were Belle, with her struggle for love and acceptance, and also Mama Mae, who takes on the mother role in The Kitchen House. Mama Mae was such a strong, admirable woman. Truly a memorable character in a book filled with characters!

Now, of course, there are characters I didn’t quite care for. I didn’t particularly care for Lavinia, who narrates most of the book. She was too whiny and too lost in her own head to see what was going on around her. She didn’t take action when action was needed, and there was a lack of communication on her part, which really irritated me. Another character I didn’t like was Marshall, the son of the plantation owner. He was just a bad, bad man. Same with his tutor, Mr. Waters, and the odious overseer, Rankin. Seriously, if you have a problem reading what despicable people in power are capable of, or issues with reading about rape, then skip this book.

About halfway through the book there is a shift that happens. A flat-out bizarre shift that made me write in my notes, “I am not sure what I am reading”. Lavinia is older now, around age sixteen or so, and the remainder of the plot hinges on things unsaid, which is my least favorite plot device ever. Ever!! So I was extremely frustrated in reading The Kitchen House, as I felt that so much of Lavinia’s conflict could’ve (and should’ve) been resolved with one or two conversations. Or at least if she looked at the world around her with her eyes open.

This was my book club’s pick for August, and unfortunately, I was sick and had to miss our discussion of the book. I had some choice words for certain characters that’s for sure! So, I’m not sure how this book would play out as a discussion book. I would think that there is no way you can read this book and not have an opinion about it, so that could make for a lively discussion.

There is also a sequel of sorts, called Glory Over Everything, which follows one character after he escapes. I am not sure I will go on to read this. Maybe at some point. I just find I’m not all that interested in returning to this depressing story, and am worried that again the plot will hinge on unspoken things. The characters may inspire me to read Glory Over Everything sooner than I planned however, as I have been thinking about them after finishing The Kitchen House.

Bottom Line: Depressing, but powerful. Too much unsaid makes for a frustrating read.

Links to The Kitchen House   on Amazon and Goodreads

Links to Glory Over Everything   on Amazon and Goodreads

6 thoughts on “Book Review: The Kitchen House by Kathleen Grissom”