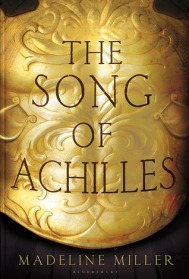 Synopsis: Set in Ancient Greece, Patroclus is an exiled prince. Achilles, the son of a goddess and a king, befriends him, and the two boys form a friendship, which turns into love. Trained by the centaur Chiron, Achilles decides to fight in the legendary Trojan War, and Patroclus follows. A re-telling of Homer’s classic, The Iliad.

Review: I really enjoyed The Song of Achilles. It was very different from what I typically read, and that was a good thing.

The Song of Achilles was the July selection for the Hype or Like Friday group on Goodreads, and thank goodness we got a book I actually liked this month! And the more I think about the book and the plot and characters, the more I like it.

Madeline Miller’s The Song of Achilles brings to life the ancient tale of The Iliad. A retelling of sorts, with plots taken from various stories, ancient Greece is brought to life with all of its gods and goddesses, centaurs and warriors, lovers and enemies.

“Our world was one of blood, and the honor it won; only cowards did not fight.  For a prince there was no choice. You warred and won, or warred and died.”

Before I get into my review, I just want to say that I have not read The Iliad. I’ve read The Odyssey, but that’s the extent of anything I’ve read about ancient Greece. I have however, travelled to Athens and various Greek Isles (Crete, Santorini, Mykonos, and Rhodes) and also Ephesus, so it was easy for me to picture the landscape and setting of the novel. Since I have not yet read The Iliad, I can’t comment on comparisons to that piece of literature.

About 75 pages into the book I had to laugh. I had not realized that the movie Troy, starring Brad Pitt as Achilles, was based on The Iliad. Definitely a face palm moment. I have seen Troy, and actually own a copy of the movie, so I’ll be watching that one again soon, once I read The Iliad.

But back to The Song of Achilles.

Our two main characters are Patroclus and Achilles. Patroclus narrates the book, and he’s a fine narrator. He was a good choice to narrate the book, as while he is near a lot of the action, he is for the most part a bystander, and so sees a lot more than one who is involved in all of the action. He is a likeable hero, but I wanted him to run far, far away from Achilles, which I don’t think was the author’s intention.

Poor Patroclus. Falling in love with the wrong guy. Achilles is kind of a jerk. And he only does what he wants to do. Yes, he’s a half-god (his mother is the sea goddess Thetis), but Madeline Miller never lets us into Achilles’ head to see what he’s thinking. We only see him through the eyes of Patroclus, who is so enamored and in love with Achilles, that to me, the reader, I was left feeling Achilles was beautiful but foolish. Perhaps that is the point.

The romance was believable, I can’t comment on whether or not Homer intended this as romance or friendship, but it is romance in this book, and it made sense. As much as I wished Patroclus would ditch Achilles for someone nicer, Achilles did truly love Patroclus. I just wish Patroclus had stood up for himself far sooner. I felt he just let Achilles walk all over him at times.

One of the biggest issues I had with the book was that Achilles never became human to me. He stayed a mythical being, shrouded in mystery. Untouchable. I wanted a bit more insight into Achilles and how he thought. This may be due to the fact that I didn’t really know his story going in. I don’t remember Troy all that well, except for how beautiful Brad Pitt was in the movie, and honestly the only thing I could recall about Achilles was his heel. And I think I know that more for the medical term than for anything actually involving Achilles.

I really enjoyed the earlier sections of the book, where Patroclus and Achilles stay with the centaur Chiron, and are trained in medicine and various other things. I wish Patroclus and Achilles had just stayed with Chiron. But no, they had to venture into the Trojan War. It was kind of like watching Titanic and hoping the boat would just alter course. But nope.

The Trojan War sections were interesting. Filled with many characters, I admit to having a huge crush on Hector. I really have no idea why, I just really like his character, at least in this book. And he really only appears very briefly. I’m interested to read Homer’s The Iliad, to see how he is portrayed in that story.

In terms of other characters I enjoyed, I liked Achilles’ mother, Thetis, the sea goddess. She is terrifying and electric. I also liked Briseis, the girl that Achilles rescues at the request of Patroclus. Another character I was interested by was Odysseus, the same Odysseus who is in The Odyssey by Homer. Guess I’m due for a reread!

One thing that really struck me while reading is how much bloodshed happened (and does still happen today) because of stubborn men. Because of hubris. I just love that word. It means “excessive pride or self-confidence”, and I was thrilled to see it mentioned in this book.

I think The Song of Achilles would make a good book club choice. It’s an interesting historical fiction tale, with many characters to discuss, and decisions to debate.

I recommend this book to those who like historical fiction, centaurs, tales of heroic men and epic stories. It was definitely not my usual read, as my historical fiction doesn’t typically go back this far, but I did truly enjoy the book and I’m glad that I read it. In any event, it is making me want to read The Iliad, and that can only be a good thing. It’s also made me want to reread The Odyssey, and I never thought I would ever say that.

Bottom Line: Excellent historical fiction with memorable characters. I just wish we had gotten more insight to Achilles. The Song of Achilles gets a definite LIKE from me for Hype or Like Friday!

Links to The Song of Achilles on Goodreads and Amazon.

Links to The Iliad on Goodreads and Amazon.

Links to The Odyssey on Goodreads and Amazon.

Link to the movie Troy on Amazon.

Have you read The Song of Achilles? Does this sound like an interesting read or are you intimidated by the Ancient Greece setting and nods to Homer?

18 thoughts on “Book Review: The Song of Achilles by Madeline Miller”