Exciting news!! Yesterday, July 2nd, was my Blogiversary!! Luvtoread is now one year old! Here’s to another year! And to celebrate I’ve decided to start using Twitter more. Follow me @luvtoread89. I’m going to post about everything there, not just books. So if you want to know more about me and what I do when I’m not blogging, head over to Twitter!

I’ve had a love of reading since I was very young, with my favorite book as a youngster being Cinderella. Many women in my family read, but a special shoutout goes to my grandmother, who continued reading until she passed away this past November at the age of 99. Sunday, June 5th, would’ve been her 100th birthday.

Born in San Francisco to Italian immigrants, she was the first of her family to be born in the United States. She was required to learn English before she could enroll in school, and since neither of my great-grandparents spoke much English, she had to be taught by a neighbor.

She once snuck onto the Golden Gate Bridge before it was opened, could always win at trivia (even in her later years) and had a lifelong love of reading. She was even still reading the day before she died, with the last time I saw her she was reading the newspaper out loud to me, and she had a romance novel next to her.

When she was in her 80s, one day she decided she wanted email. She wanted to go online! And she wanted to play solitaire! So, she was set up with an email address, and she chose some iteration of the phrase “love to read”. I can’t recall exactly what it was (ie, luv2read, love2read, luvtoread, etc) as she didn’t keep the email for that long. So, when I decided to start a book blog and was trying to figure out what to call it, I ended up choosing luvtoread, in honor of my grandmother.

And so, after she died, as a tribute to her, I wanted to read her favorite books, the Brides of Montclair series by Jane Peart. 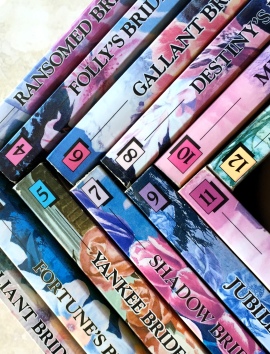 I’ve got a lot of my grandmother’s books stashed away, and hope to at some point read through them all. This is a massive undertaking for me, because my grandmother’s favorite books were Christian romance novels, with a particular interest in cowboys. Nothing about these types of books interests me whatsoever. Nope – not even the cowboys. No studs in spurs for me!

I’ll never forget the one Christmas where we were all sitting around discussing whatever, and my grandmother, who must’ve been in her 80s at this point, exclaimed how much she loved cowboys. And she didn’t just love cowboys, she looovveeeed cowboys. This was news to the family! But now that her secret was out, she could collect cowboy romance novels to her heart’s content.

Her favorite series, luckily for me a non-cowboy series, was the Brides of Montclair series, with the first book set in pre-Civil War Virginia. These books follow one family throughout the time period – I’m not sure how far it goes, if it ends after the Civil War or continues on.

Sadly, they are romance novels, and I dutifully tried to read them. I have gotten through 2 of the books so far, and I will at some point continue on with the series, but I needed to take a break from romance. I don’t know what it is about the romance genre that I dislike so much. It may be because I’m utterly unromantic in real life, and if a guy should try to speak to me romantically I’m more likely to laugh at him (or roll my eyes and give an irritated sigh) then to swoon. It’s a good thing that my husband is just about as romantic as I am.

Now with the Brides of Montclair, the two books I’ve read haven’t been terrible! I fully expected to hate these books and for them to be sappy and blah. I’m glad to say that I was wrong, to a point. They are definitely too sappy for me, but they aren’t bad books! So here are my mini reviews:

Valiant Bride by Jane Peart (Brides of Montclair #1): This book follows the love story of Noramary Marsh and Duncan Montrose. See, now there is a leading man’s name! Duncan Montrose! Such a strong name – you just know he is tall, dark, and handsome. And rich. Noramary is secretly engaged to her longtime friend, Robert, and Duncan is engaged to marry Noramary’s cousin Winnie. Winnie however elopes with someone else, leaving Duncan in the lurch. So, of course, to save the family’s honor, Noramary must halt her secret engagement and marry Duncan. I liked the characters of Noramary and Duncan actually quite a bit, and was somewhat invested in their romance. However, the author then has to keep them apart by what is seriously the most annoying plot point ever. A misunderstanding that could be cleared up if they would just talk to each other! I really dislike this plot contrivance, it is so silly, but seems to happen in so many books, movies, and TV shows. You know it’s bad when the driving tension can be cleared up with a ten-minute conversation. I rated this 3 stars on Goodreads. 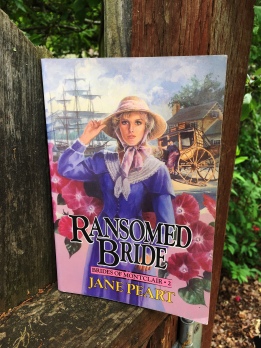 Ransomed Bride by Jane Peart (Brides of Montclair #2): Now this book is set with the next generation of the Montrose family, with Noramary and Duncan’s son Cameron being the male lead. Cameron falls in love with his cousin, Lorabeth, who happens to be the daughter of Winnie, the gal who eloped in book one. Lorabeth has escaped England, running from her mother who is attempting to arrange her marriage with someone completely unsuitable. With Cameron and Lorabeth being cousins, their relationship is forbidden, and both become engaged to other people. This book I didn’t like as much because I couldn’t connect with either Cameron or Lorabeth. Cameron was drippy and boring, definitely not the leading man Duncan Montrose was, and Lorabeth was too whiny. Plus, they pretty much fell in love instantly, which just doesn’t happen. And the whole cousin thing was weirding me out. I rated this one 2 stars on Goodreads.

So, that’s as far as I got into the series. I’ll try to read more, I kind of stopped because I wanted to stop reading romance books, and book three, Fortune’s Bride, is a longer book.

I wasn’t sure what to expect with these books, I was assuming that they’d be sappy and boring, but I actually liked Valiant Bride far more than I expected to. The books are very much a product of their time, with the first book being published in 1985.

I can see why my grandmother loved them so much; they contain atmosphere and handsome men with capable heroines, and inspiring Bible verses that my grandmother liked to underline.

So I will definitely continue on reading my grandmother’s books, as when I hold them in my hand and see her writing in the margins, I feel connected to her and feel her presence.

But will I go on to read more mainstream romance novels, or other Christian romance novels that aren’t my grandmothers? Eh… probably not. The plot would have to sound very promising! Never say never, but it’s unlikely.

Maybe once I get to her cowboy romance books I’ll discover a love for cowboys!