Synopsis: Winston Smith meets and falls in love with Julia, as Big Brother attempts to control every action and thought in a chilling dystopian society. 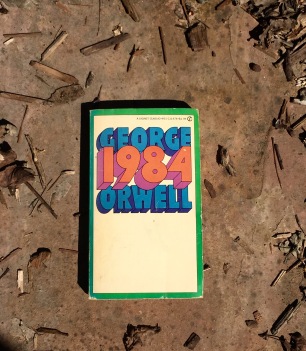 Review: I honestly don’t know how to describe this book. For once, I’m at a loss for words and I struggled to write this review. 1984 was horrific and intense, with a haunting final image.

George Orwell’s 1984 takes us into a dystopian society, where Big Brother looms large and controls everything. People have telescreens in their homes that watch their every move. Thought Police can read your mind, and can arrest you for even thinking something rebellious. History is constantly rewritten to accommodate the present, and people disappear without rhyme or reason, never to be seen again.

Winston Smith is the main character, and he’s an everyman. He doesn’t have much of a personality, but in his environment, how can he? Having a bit more of a personality is Julia, although I really didn’t like her. She was too complacent and just didn’t care about what was going on around her. She was rebellious to a point, but it honestly felt like she was only rebellious because she wanted sex. Perhaps I misread her character, but that seemed to be the driving force behind everything she did. It just seemed a bit off.

Here Winston is, honestly trying to do what he can to silently rebel in his mind, and Julia didn’t really seem to care about what the government was doing and didn’t really want anything to change.

I could’ve done without all of the references to Winston’s varicose ulcer on his ankle, that was just unnecessary. I felt that was mentioned too many times, and once or twice is fine, but it seemed to be every other page that some mention was made. I dislike when authors repeatedly say the same thing, especially about something that doesn’t seem to have anything to do with the actual plot. Perhaps it represented something that I didn’t get. Anyone care to weigh in? Maybe it was that he was slowly being eaten away from the inside out as he was silently rebelling? The references seem to drop off towards the end of the book (or maybe I was just ignoring them by that point), which would fit with the ulcer signifying Winston’s rebellion.

I found the society described to be absolutely terrifying. Conformity is key, with no individualism. You must agree wholeheartedly with the government. The government brainwashes its citizens, and alters history on a daily basis to suit what it is currently trying to push.

A society like this is one of my biggest fears, and we have technology that could enable a society like this (to a degree). Telescreens in your house watching your every move? Check. The government having the ability to fly helicopters and spy in windows? Check (drones). The ability to re-write history? Check. We’ve got the Internet, with more and more people not bothering to read actual books. How many times a day do we hear “it’s on the internet so it must be true”. I hear this all the time!!

Did I like this book? Nope. It’s impossible to “like” something that takes one of your biggest fears and turns that into an actual, realistic way of life, with modern implications that are absolutely terrifying. So no, I didn’t like this book, and I will most probably never read this again, as those last 60 pages or so were too intense. I haven’t even summoned the energy to read the afterword. I’ve certainly read books that have been more graphic, but the way this was told really knocked the wind out of me. But even though I can’t like it, I definitely appreciate it and its themes, and I believe this is a must read for everyone.

Bottom Line: Terrifying and chilling. This is a book everyone should read.

Added to my TBR:

What do you think? Have you read 1984? Will you ever read it again? Has my review totally scared you away from ever reading this book?